The story goes back to October of 2012, a year and the woman has permanent

damage but at least she survived where many did not.  She has gone through months of treatment and the stress from the bills is mounting and she has gone through her life’s savings!  The patient said in an interview, they made me sick and I should not have to  pay a penny and she is right.  She has to sue and has no other choice.

Fungal Meningitis Cases up to 91 and 7 Deaths So Far

750 people nationwide were sickened with the injections.  Her speech is now slurred and she’s been left clumsy, can't put her hand behind her head and has memory lapses.  Now she has to file a lawsuit to recover anything and get the hospital off her back.  You know what the hospital said…God forbid they frigging deviate and said they can’t violate Medicare and private insurance contracts…see how afraid the money tight hospitals are.

“Saint Thomas West spokeswoman Rebecca Climer said in an email response to questions that the hospital is following its normal billing practices and that "legal and contractual issues in the Medicare program and in private insurance contracts restrict a provider's ability to deviate" from those practices.”

Saint Thomas Health is a system of nine hospitals, 65 medical practices, 13 chest pain centers, 16 outpatient rehabilitation centers, 14 ambulatory surgery centers and five community clinics and is a part of Ascension Health.  Ascension is a not for profit hospital group and they are part of the Ascension Health Ventures VC group, so they pump some money over there.  BD 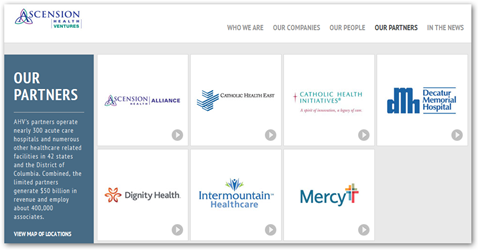 Sign of the times, the story of the patient and hospitals being Venture Capitalists, Catholic hospitals too.  BD

NASHVILLE, Tenn. (AP) — More than a year after a routine steroid injection turned into a painful fungal infection that nearly killed her, Marjorie Norwood is still suffering physically and emotionally. She also carries a huge stress: the hospital that houses the clinic where she contracted the infection has billed more than half a million dollars for her treatment.

Norwood argues that she should not have to pay Saint Thomas West Hospital for the months of painful treatment and expensive medicines that fought the infection but did not restore her health.

"They made me sick, and they made me come to their hospital to take care of me. And it was their fault that I was there," she said during a recent interview. "I shouldn't have had to pay a cent, not a dime."

The 60-year-old says the disease left her with permanent nerve damage. Despite months of therapy, Norwood sometimes slurs her speech. She has a hard time opening things. She can be clumsy. She can't put her hand behind her head. She sometimes doesn't remember recent conversations with her daughter.

Like many of the victims, Norwood is suing the hospital, the clinic and the New England-based pharmacy that provided the medication. She hopes a jury will award her enough damages to at least pay her medical bills.

"Our savings is gone. We have no savings, no retirement. Everything we've got is gone," Norwood said.