Home » Other Items of Interest » Update on D.r Afridi, Who Helped US Capture Bin Laden, Pakistani Premier Pledges to Reconsider Case As The Doctor Is Still Incarcerated

Update on D.r Afridi, Who Helped US Capture Bin Laden, Pakistani Premier Pledges to Reconsider Case As The Doctor Is Still Incarcerated 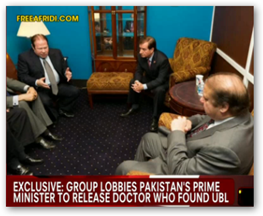 to get involved at the Free Dr. Afridi website.

Bob Lorsch, MMRGlobal, a sponsor of the Medical Quack has had a campaign in force for several months now and he recently traveled to Washington and took part in a meeting with the Pakistan's national security adviser Sartaj Aziz and finance minister Ishaq Dar along with Chairman of the House Committee on Foreign Affairs Rep. Ed Royce, from California.

Representative Royce was asking if if a pardon could be in order for the doctor as he is still held in prison even though the original 33 year sentence was over ruled.  In the US one would be out walking and not still in jail.  It is stated to be a tense situation as the doctor still represents US involvement in the affairs of the region.  There could be a re-trial, more or other charges, and so on, but at minimum a re-consideration effort was agreed to at the meeting in Washington.  You can read the full article and watch the video at the link from Fox news.   BD

Congressional and private activists lobbying to free the doctor who h

elped the CIA pinpoint Usama Bin Laden have won assurances from Pakistan's prime minister that his government will reconsider the case, Fox News has learned.

In a rare and carefully stage-managed private meeting between a world leader, congressional representatives and a non-government individual during a closed-door official House of Representatives event in Washington, the newly elected Nawaz Sharif committed to task his top law officials with reviewing the prosecution process for Dr. Shakil Afridi, according to those who attended the impromptu meeting.

Saturday, October 26, 2013
Other Items of Interest