here.  I know it gets confusing as we have these things out there called “data platforms” and even the layman has probably heard those words.  Well with a data platform programmers are not writing from the bottom up but rather a lot of their code is code somebody else already wrote and they are putting some frosting on the cake (layers written by others) and that frosting better go with the cake and taste good.  If there’s problems with the cake the frosting isn’t going taste good either.  So how’s that for a simple analogy.

When I used program, I wrote from the bottom up, everything, no platform so I did and cake and several layers frosting as well, so I have lived this and know exactly what it means when you have software glitches and failures and remember very clearly hours and week of sleep deprivation working on upgrades and glitches myself, so be kind when it comes to some of this and be patient.  I used to walk in and look at a couple doctors that would say “what the f**k is not going to work after this update”…makes you feel real good doesn’t it and does wonders for your confidence after a few weeks of very little sleep and living, breathing and eating code.

Now enter the politicians that think they can put deadlines on when the glitches should be fixed…when I read those article I laugh and laugh and laugh..as it’s pure sign of complete digital illiteracy as you can’t do that.  Developers would like to meet those dates but it’s not always possible, that is reality.  What are you going to do, water board the technicians to get them to get it done faster when they are working at 150% already?  duh??  Now I read a news article that they are going to rebuild it from the bottom up..that’s ridiculous and not going to happen as some modules maybe rebuilt but it’s not a bottom up rebuild..you don’t have time for it for one…geez…time for a Jon Stewart break…

If you listen to politicians enough or the Secretary of

HHS, they make you think that’s possible.  I said in 2009 that Health IT would eat her up as we needed a leader with “some” tech in their background and here we are today..eaten up.  Instead of farting around with a Facebook contest efforts to start work on the exchanges had a much higher priority but without any tech knowledge that’s what you get, duh, she doesn't know the difference.  It wouldn’t have been any better if Daschle would have paid his taxes some type of person, no tech experience in the background.

Here’s what our leader of HHS said back in February and it pissed a lot of technicians off.  My readers were able to get the real story…as that’s what I do here.

“I’m sure the CIOs out there just sigh too when articles as such come out, again they probably share the same impression, will someone get a clue on how this stuff doesn’t happen in the time frame you want:)  This whole readmissions issue with looking for “magic algorithms” is yet another issue.  Sure analytics help but they are not the 100% answer.”

Remember old Ryan wanting to put vouchers in for Medicare…well guess what IT Infrastructure again, and his mess would have been worse than this to build…here’s what all the connections for this to work looks like. 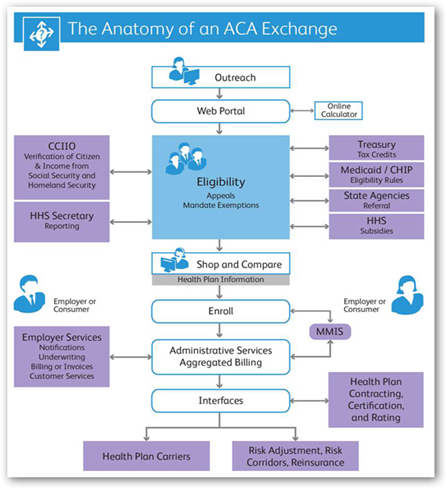 Now we have one of the Republicans calling for the firing of Sebelius…well what do you know one digital illit calling for the firing of another one. I have an answer though for Congress, get on the stick and we need to get a Wellness portal as the level of digital literacy is dangerously low and as consumers we need to begin a risk assessment process as we feel all of Congress should be on “pay for performance”..you know, just like Congress sits around and talks about for doctors…let’s share the love and get those guys and gals up to snuff.  Get an IBMWatson set up (it doing wonders at Citigroup with modeling for profits, look at their money)  and start learning how to model laws and restore the Office of Technology Assessment and maybe all will get along better, it works in schools as communications get better with more education so what the hell, can’t it work here too…digital illiteracy is showing big time as all laws today have an IT infrastructure attached to them…get with that reality. If we had some education on Digital Literacy going on we wouldn’t have to worry about John McCain getting caught in the same room playing video poker on his phone while Ted Cruz reads Dr. Seuss stories to him:)

Congress Needs a “Wellness Portal” As Predictive Behavior Analytics And Behavior Modification Is Needed So Consumers Can Start Scoring Congressmen To Create Risk Assessments Along With Adding Pay for Performance Assessments Their Positions….

Back to HHS once again, this public display of digital illiteracy pissed a lot of people off too including some folks at Harvard who were also vocal about it…tech folks, hospitals, doctors and others just sat back and laughed after they got over being mad and ok one more blunder from HHS with a digital illiterate leadership.

Then we had the Jon Stewart clincher interview…I thought to myself are you a glutton for punishment at this point…and not even one word of thanks to the many people who are under extreme pressure and working their asses off..remember what I said up above, multiply that out by hundreds ok?   It’s very apparent to me that Ms. Sebelius looks at the tech community as the enemy for her not looking good right now, just watch body language.

Now back to more nonsense on another article about having a “deadline” to meet for fixing glitches, I read these and continue to laugh, start water boarding those programmers.  Once upon a time a company called Intuit tried to lock their engineers into a room until they got the coding right, didn’t happen and Intuit closed down Quicken Health so it doesn’t work.

Intuit Forces Engineers Into A Room Until They “Get It Right”–“The ...

Granted, there were some things that could have been done differently like starting the work on the exchanges sooner but when you have someone

at the top who can’t think like a hybrid and visualize you get what we got…time for HHS and SEC to have some technologists at the top and again let’s get some pay for performance in for the folks at the other end of the digital illiterate stick.

When you see these articles coming out with deadlines for the coding folks to meet, just ignore them as they are big signs of digital illits blowing their big horns and use the phone and get enrolled that way as there are alternatives besides the web sites if you have problems and the important thing is to get enrolled and when the glitches get fixed, they will be fixed.

So if you haven not figured this out yet the insurance exchanges are one big heaping load of algorithms that need to work and play with each other and software is nothing but a bunch of algorithms working together, Bill Gates said that.  BD