This is the first time in the world this has been with a heart that had stopped beating.  Normally hearts are removed from “brain dead” individuals but not in this case as a “box” has been created to contain and revive the heart to start beating again.  This is huge. 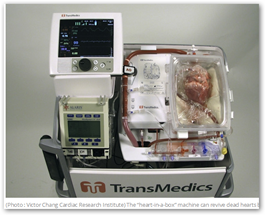 beating for 30 minutes have been revived.

This of course will serve to make more hearts available for transplants.  BD

While donor hearts usually come from brain dead patients whose hearts are still beating, the team at St. Vincent's Hospital in Sydney using transplanted hearts that had stopped beating for up to 20 minutes.

The first patient to receive one of the hearts, 57-year-old Michelle Gribilas, said she felt a decade younger and was now a "different person." Gribilias was suffering from congenital heart failure at the time of her surgery.

The hearts were placed in a machine called a "heart-in-a-box." The machine revived the dead hearts by pumping warm blood into them. Cardiologist Peter MacDonald told WebMD, "We removed blood from the donor to prime the machine. We then take the heart out, connect it to the machine, warm it up, and when we warm it up, the heart starts to beat."

MacDonald added, "This breakthrough represents a major inroad to reducing the shortage of donor organs."