Five US Airports To Step Up New Screening Measures for Ebola

This is from the White House on the steps being taken.  As you can see the airports are on the east coast and so far nothing has really affected the west coast areas beyond Texas.  All of this doesn’t begin until next week with screening people arriving from areas where 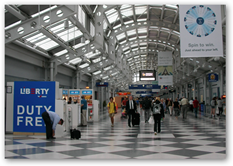 the Ebola infections exist.  With the current conditions in Chicago, this may make flying in and out of there a little bit more cumbersome since the fire but it has to be done.  You might wonder why this has taken so long as have many of the Ebola processes to kick in high gear?  BD

Today, the Centers for Disease Control and Prevention (CDC) and the Department of Homeland Security (DHS) announced that the following five U.S. airports will soon begin enhanced Ebola screening for all travelers coming from Ebola-affected countries:

These five airports receive more than 94% of travelers coming to the United States from the Ebola-affected nations of Guinea, Liberia, and Sierra Leone.

Here's what will happen after travelers' passports are reviewed upon their arrival at any of these airports:

JFK International Airport will implement the new screening measures this Saturday, while Washington Dulles, Newark, Chicago O'Hare, and Atlanta will begin next week. CDC is also sending additional staff to these five airports.

Read the press release from CDC and DHS here.