This is huge, Care Fusion is located in San Diego, a big MedTech company as is Becton.  Care Fusion

is also pretty large in the surveillance and analytics in the Health IT side of the business.   The company is especially known for their Pyxis Medication management.

The CareFusion Coordination Engine (CCE) integrates CareFusion technologies and HIT systems. By drawing on clinical and administrative expertise, it provides a single platform to support a hospital or multiple facilities within an Integrated Delivery Network (IDN).

The Pyxis Med Technologies as an example is integrated with Cerner Medical records for one so that gives you an idea on how some of the med tech products from Care Fusion work with medical record systems.   The company has a manufacturing location right over the border from San Diego in Tijuana.

Goldman Sachs served as the financial advisor on the deal and was involved in the raising of $9.1 billion.  Regulatory and shareholder approval remains pending.  BD

CareFusion will be purchased for $12.2 billion by medical products maker BD, (Becton, Dickinson and Co.), the 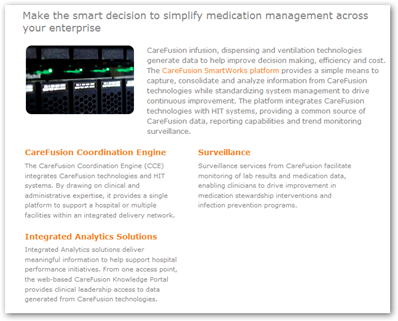 The purchase for $58.00 per share in cash and stock has been unanimously approved by the boards of both companies, they said in a statement.

Assuming the sale goes through, it will be the second biggest purchase of a San Diego area life science company. The largest was the sale of Carlsbad's Life Technologies to Thermo Fisher Scientific was officially concluded in February 2014 for $13.6 billion.

CareFusion was formed in 2009 as a spinoff from Cardinal Health, incorporating well-known lines of medical equipment developed in San Diego by three companies that became legendary in the industry. Their success enabled biomedical entrepreneurs to start even more companies, helping to create the region's massive life science industry of today.

Cardinal Health bought Alaris, seller of the IVAC and IMED devices, in 2004 for $2 billion.

Both IVAC and IMED were sold and resold again, the bitter rivals ultimately merging into Alaris Medical Systems, founded in 1994. More information on CareFusion, IVAC, IMED and Alaris can be found at the San Diego Technology Archive.