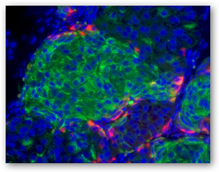 and resulted in millions of pancreatic cells that secret insulin and keeps blood sugar in balance.  Hopefully the cells can in time be transplanted into diabetes patients and allow them to create insulin, which would be done naturally, this is incredible.

If this develops it could meant the eventual cure and end for insulin shots.  This is still years away and the process takes about 40 days to complete.  It is focused on diabetes one but could also be used to treat diabetes two.  Wouldn’t that be great for those with diabetes to have a cure!  It would be nice to get rid of some of those ICD codes with cure codes.  BD

A cure for diabetes could be imminent after scientists discovered how to make huge quantities of insulin-producing cells, in a breakthrough hailed as significant as antibiotics.

Harvard University has, for the first time, managed to manufacture the millions of beta cells required for transplantation.

It could mean the end of daily insulin injections for the 400,000 people in Britain living with Type 1 diabetes.

And it marks the culmination of 23-years of research for Harvard professor Doug Melton who has been trying to find a cure for the disease since his son Sam was diagnosed with Type 1 diabetes as a baby.

“We are now just one pre-clinical step away from the finish line,” said Prof Melton.

Asked about his children’s reaction he said: "I think like all kids, they always assumed that if I said I'd do this, I'd do it,

"It was gratifying to know that we can do something that we always thought was possible.

Professor Anthony Hollander, Head of Institute of Integrative Biology at the University of Liverpool, added:“This is very exciting fundamental research that solves a major roadblock in the development of a stem cell treatment for diabetes.