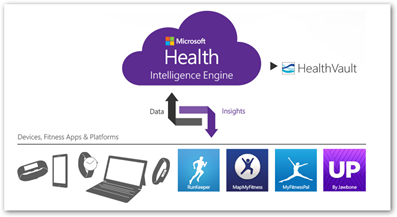 beginning with the unboxing.  It was announced last night and it’s already in the stores.  This was nice and not having to wait.  It comes in 3 sizes, small, medium and large.  You can also order one online.  The cost is $199 and there’s an extra charger available for $19.95.

It has a 48 hour battery life to begin with and there’s some additional perks here than just another band that monitors your heart rate.  The magnetic charger looks neat too.  It is water resistant but not water proof so don’t shower or swim with the Band.  You turn it on and download the app and it connects to your phone and does the Blue Tooth pair up.

The app works on Windows Phone, IOS, and the Android phones so all phones are covered.  The touch screen on the Band looks nice and you can scroll through the icons.  It does text messaging.  You get your heart rate and it will check out the quality of your sleep.  It has a UV sensor and that’s a first that I have seen on any device.  All the social networks are there.  It uses machine learning technologies to coach you along and eventually HealthVault will be in the to synchronize.

You get a lot more here than just the standard fitness band.  Good marketing to include emails, etc.  There are guided work outs.  You create your profile and enter some basic information.  You can customize the look of the band and there’s Microphone Cortana to use as well.  There’s a total of 20 sensors in the unit and room for the extra battery too.

Did you like that video?  Ok here’s one that uses a journobot, just for fun and see how long you can stand it:)  Long Tail is the name of some patented software that does some of this.  I sure hope the nightly news doesn’t turn into this.

Overall this is probably the best Fitness Band I have seen because it does much more than just sensors.  BD