FDA Approves an Even Pricier Pill to Cure Hepatitis C–Combination Pill Solvaldi From Gilead–Same Company Selling the $84,000 Treatment and Cure…

Solvaldi was expensive enough and now the company has a combination bill that’s’ even more expensive.  Solvaldi is $84,000 for a typical course of treatment and has to be combined with other therapies and had $9 billion in sales.  The new drug is Solvaldi with another agent into a single pill and 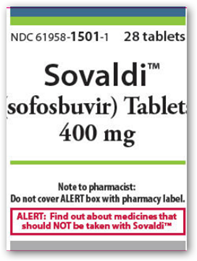 it’s cost is $94,500 and the reasoning here appears to be that the treatment is now all in one pill.

The Harvoni pill has a treatment time of 8 weeks versus 12 weeks as with Sovaldi but still even at $63,000 for the treatment this is out of affordability as all insurers are not covering or are requiring patients to pay a lot more.  One person in this article below has United Healthcare and they want him to pay half.  Insurance companies have to do a better job with negotiating price for sure.  United complained about this hurting their profits as a matter of fact at their last shareholder meeting so it sounds like they could be clamping down on who gets it.  Sovaldi is one of best drugs that has come out in a long time as the cure for hepatitis is there.

Now we are talking about yet more incentives for doctors to prescribe drugs that are less expensive and most do that anyway unless a generic is not going to handle the need from the patient, so again I don’t know what pharmacy benefit managers are going to prove with this overall.  Pharmaceuticals are kind of the last frontier on cutting healthcare costs and it’s a big one.    Solvaldi recorded the biggest drug launch in history with racking up $ 9 billion in sales.

It’s obvious pharma company, Gilead is not into “affordable care” but rather bigger profits benefiting from people who need treatment for hepatitis C.  BD

Gilead executives say Harvoni's price is actually slightly lower than the current standard treatment: Sovaldi plus a cocktail of two other drugs, which the company estimates comes to $95,000 for 12 weeks, on average. Despite such explanations, the new drug's approval is sure to renew scrutiny of prices for life-saving drugs.

Members of the Senate have already asked Gilead to hand over documents detailing its decision to price Sovaldi at $84,000 for one 12-week regimen.

The health insurance industry has been blasting Gilead for months over Sovaldi's price, and most insurers require prior authorization before they will pay for it. The industry's leading trade group said Harvoni would continue to drive up health care costs.

"Gilead had an opportunity to demonstrate that it wants to be part of the affordability solution, but the company still seems to believe it has a blank check," said America's Health Insurance Plans, in a statement.

Gilead executives say their drugs are cost effective, despite their large upfront cost, because they cure more patients in less time than older drugs, and prevent the catastrophic problems for patients like liver failure.

Sovaldi will continue to be used by patients with three other genotypes of the virus, who account for about 20 to 25 percent of U.S. cases. Those patients were already able to take Sovaldi without the combination of ribavirin pills and interferon injections, a combination that can cause nausea, fatigue, rash and other symptoms.

Company studies submitted to the FDA showed that Harvoni cured between 94 and 99 percent of patients across three trials of 1,500 patients with various stages of the disease.