In case you missed the report last night, this is a good one by all means to watch.  Patients can’t afford their co-pays.  With cancer drugs these are huge amounts and depending on the coverage you have, the amount varies.  Cancer drug therapy is one of the leading 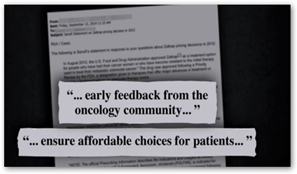 causes of bankruptcy in the US.  Financial toxicity is the word used to describe the crisis.  Most of the drug costs are huge and it’s indeed a captive market.

The drug companies say the price to develop these drugs are high and we know of late that many big companies are buying up biotech companies that develop the drugs.  Zaltrap was compared to Avastin and work in the same way, but one drug was much more expensive than the other.  $11,000 per month was the cost of Zaltrp while Avastin was $5000 a month.  Sloan Kettering did the study and the hospital decided to discontinue Zaltrap.  The price tag for 41 days of extra life was too expensive.  Patients on Medicare would have to pay $2000 a month of their own money for the co-pay.  I remember this in the New York Times.

Drug companies can charge whatever they want for cancer drugs.  There’s no negotiating with Medicare as they are not allowed to contract with drug companies, which should be changed.  We pay much more in the US than other countries.  Sanofi cut the price in half after the media article came out.  The kickback routine was something else exposed here.

MD Anderson, next got into action and wanted reductions in drug costs that extend life for 10 years, much longer than 41 days listed above.  Gleevec is another drug that came into question as drug companies start raising prices even on older drugs, this one was tripled.

The pharma marketing and lobbying group of course came back to blame the insurance industry.  The law has to be changed that prevents Medicare from negotiating the price of the drugs.  American patients pay 2 to 3 times more for drugs than other countries.  “The only drug that works is one that the patient can afford”.

Here’s an additional video from ASCO, the major oncologists group in the US, trying to also tackle the high price of the drugs.  He says insurers also play a part in this as well.  Again it’s becoming a real problem for the patients and ASCO wants to change the way doctors get paid on some of the incentives give from the drug companies.  BD