Home » My Commentaries » Other Items of Interest » Technology » Pope Says God Did Not Create Algorithms, Mankind Does That And They Don’t Conflict With The Idea of Creation

Pope Says God Did Not Create Algorithms, Mankind Does That And They Don’t Conflict With The Idea of Creation

So there you have it, so when you see magical stuff on your computer screen, it was a human and not a magic wand that made everything happen.  He says the Big Bang theory doesn’t conflict with the creative intervention of God.  What he didn’t address are those who “sin” with their code 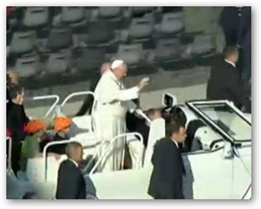 for profit and there’s a lot of that out there and we can start with banks and go from there.  Watch video #2 in the footer of this blog to learn about how cheating with code by quants at banks works if you like.  We do have some folks that think there’s algo fairies out there and I’ve written about them quite a bit.  Sebelius former secretary of HHS was a great one for thinking there were algorithm fairies with wands that came down from the sky at times.

We have these folks too over on the hill that think there’s magical algorithm fairies out there too and thus they too are afflicted with what I called “The Sebelius Syndrome”, the belief in algo fairies.

Committee Struggling To Understand Where Virtual Software Models Begin and Leave Off Relative to Health Insurance Exchanges–Continued Strong Belief That “Technology And Algorithm Fairies” Exist In The Real World, The Sebelius Syndrome Proving To Be Very Contagious…

I said this a couple years ago (link below) about half of the analytics sold out there will be a waste of investment and strangely enough a banker who was being pretty honest totally agreed with me and we are now seeing it now with everyone chasing the big data train, looking for some magical algorithm fairies to come up with a math model to make everything ok again, but it’s not going to happen.  Instead we get algorithms and formulas that are dirty and take and move our money instead.  In finance, they don’t change the portfolio, they just change the math which becomes the models for building the algorithms.  You can’t see them, talk to them or have any impact so maybe that’s why some folks confuse algorithms with fairies too.

So in closing here this was actually pretty cool for the Pope to come out and talk about virtual and real worlds as they mix, don’t mix and have to mix in the world we live in today.  BD

Big Bang theory and evolution in nature "do not contradict" the idea of creation, Pope Francis has told an audience at the Vatican, saying God was not “a magician with a magic wand.” The Pope’s remarks on Monday to the Pontifical Academy of Sciences appeared to be a theological break from his predecessor Benedict XVI, a strong exponent of creationism.

“The beginning of the world is not the work of chaos that owes its origin to something else, but it derives directly from a supreme principle that creates out of love,” Pope Francis said. “The Big Bang, that today is considered to be the origin of the world, does not contradict the creative intervention of God; on the contrary, it requires it. Evolution in nature is not in contrast with the notion of [divine] creation because evolution requires the creation of the beings that evolve.”

Tuesday, October 28, 2014
My Commentaries , Other Items of Interest , Technology