Home » Medically Related » My Commentaries » Technology » Dallas Hospital Had Ebola Screening Machine Military is Using in Africa–Sat on Shelf Not Used Due to FDA Guidelines Prohibiting Use of the Device–Is This Why Our New Ebola Czar is a Lawyer?

This is not a nice story at all now the the patient died and the resultant series of events that have followed.  The military is currently using the machine in Liberia so we have not heard the end of this one.  Perhaps in the panic everyone forgot they had this machine sitting around?

“The FilmArray is an FDA-cleared multiplex PCR system that integrates sample preparation,

amplification, detection and analysis. It requires just a few minutes of hands-on-time and its turnaround time is just about an hour, giving you faster results which may lead to better patient care.

The FilmArray now has three FDA-cleared panels – the Respiratory Panel, the Blood Culture Identification Panel, and the Gastrointestinal Panel. Together, these panels test for more than a hundred pathogens. Thus, FilmArray is not only the fastest way to better results; it’s the fastest way to more results.”

The FilmArray is FDA approved but perhaps not for use in the US for detecting Ebola?  Hospitals have to agree to use the machine specifically for research projects only…and here’s another clip worth reading from this article:

“The FDA rules in what are called “research use only” machines are far more lax than for machines that must provide clinical diagnosis. According to representatives from BioFire, even after the FDA approved the use of the machine for Ebola screening and allowed workers at the hospital to acquire the proper kit for Ebola testing, a 10-20 day “validation” procedure would kick in before they could change the machine’s use from diagnostics to research — and the results would have to go to the Centers for Disease Control for confirmation.

Dr. Luciana Borio, assistant commissioner for counterterrorism policy and acting deputy chief scientist at the FDA, recently told National Journal that the agency was looking to speed up evaluation of new drugs to treat Ebola.”

Stay tuned as I’m sure we’ll here more about this and perhaps this is why we have a lawyer as the Ebola Czar now?  BD

It’s a toaster-sized box called FilmArray, produced by a company called BioFire, a subsidiary of bioMérieux and it’s capable of detecting Ebola with a high degree of confidence — in under an hour.

Incredibly, it was present at Dallas Presbyterian Hospital when Ebola patient Thomas 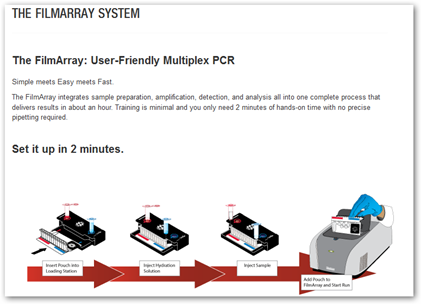 Eric Duncan walked through the door, complaining of fever and he had just come from Liberia. Duncan was sent home, but even still, FDA guidelines prohibited the hospital from using the machine to screen for Ebola.

The FilmArray retails for about $39,000 per unit and can screen for the genetic markers of a wide number of respiratory, gastro-intestinal and other illness, including Ebola, but only with the right “kit” in place. Current FDA guidelines would not have allowed Dallas Presbyterian Hospital to get that kit. That’s despite the fact that it can provide results with higher than 90 percent certainty and it’s one of the machines that the military is currently using to screen for Ebola in Africa.

BioFire Diagnostics, a Utah-based firm that produces disease detection technology, confirmed that the Dallas Presbyterian Hospital did in fact have one of the machines (possibly for as long as two years) sitting on the shelf when Duncan came in.

Speaking before a congressional panel Thursday, CDC Director Dr. Tom Frieden acknowledged that airport screening for Ebola was extremely limited. He also said that he was open to any strategy to reduce risks to the general population from Ebola. Other witnesses at the hearing said the U.S. is rapidly speeding up the development and deployment of new diagnostic systems.