The cancer patient gives his verdict on Drug Trial - Abiraterone

At 50 diagnosed with prostate cancer, tried radiotherapy and hormone suppressants, but a few months later the cancer had spread to his bones.  He was told he had around 2 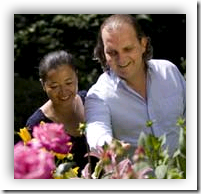 years left to live and was in a big amount of pain.  He signed up for the trial of the drug abiraterone and there were substantial improvements in his condition within a week, and within 6 weeks no longer needed pain tablets.  The downside of the drug was a little extra weight.  He’s a fan of this drug and trial and perhaps can offer hope to others as he feels without it he may not be around today.  BD

Simon Bush was told that he had prostate cancer three years ago. In January this year he went skiing for the first time in 25 years. “I had so much fun that I went again in March,” he said.

This is remarkable, considering that a little more than a year ago Mr Bush was in such pain that he struggled simply to get in and out of a car.