Home » Medically Related » Other Items of Interest » Liver disease therapeutic patents from CellPoint Diagnostics Up on the Auction Block..

Liver disease therapeutic patents from CellPoint Diagnostics Up on the Auction Block..

Intellectual Property on the auction block, patents with FDA approval.  This is the first time I have noticed technology with health care just up on the open auction block, especially as it relates to cancer research.  With the acquisition, it must not fit into the same business model as the one from the new owner, CellPoint.  Bidding starts at 25K.  As biotech moves so quickly, as well as the potential funding and mergers, I would imagine there could be more of this type of activity in the future.  Again, it just struck me as being strange as I see mergers and buyouts all the time, but have not seen an auction of such yet.  BD

IpAuctions, Inc. will auction the worldwide biotherapeutic patents previously owned by Cell Works Inc., a Maryland-based biotech company, and acquired by CellPoint Diagnostics, Inc., based in Mountain View, Calif. These patents primarily consist of organ-targeted drug delivery systems to combat liver disease.  Fifteen major U.S. and worldwide medical patents and applications in three major treatment areas will be auctioned, including one associated with a liver cancer therapeutic drug that has been granted orphan drug status by the Food and Drug Administration (FDA). 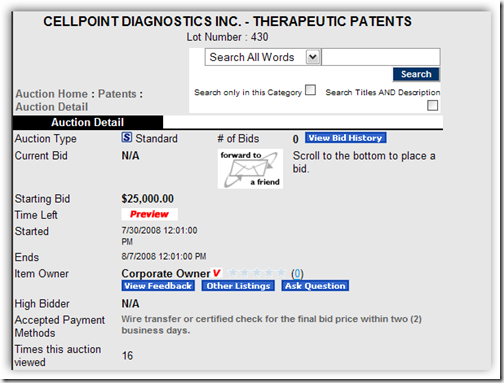