This appears to be a replacement to the scalpel as known today.  Less bleeding and 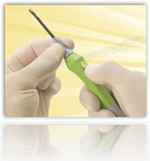 better control are some of the benefits for surgeons.  This gives the best of both worlds to the surgeon it appears.  Other devices on the market also control bleeding but potentially cause additional tissue damage whereas the Plasma Blade is engineered to take this one step further.  The techniques used by the device were originally developed at Stanford University.

The pulsing action leads to less surrounding tissue damage.  The Pulsar generator is a plug and play device that works with the Plasma Blade to set and monitor the Plasma Blade during surgery.  The device is set to be for sale in the very near future.  BD

PEAK Surgical, Inc., a medical device company that has developed a 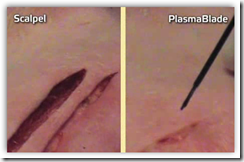 new tissue dissection system based on a proprietary technology, announced  that the U.S. Food and Drug Administration has granted the company 510(k) clearance to market its PEAK(R) Surgery System for use in general surgery.