This is a follow up on the City of Angels Medical Center where the homeless were being given medical care they did not need in exchange for money and other compensations to allegedly allow for fraudulent billing.  We have seen a lot of fraud uncovered this year, including billing medical services under the names of dead doctors, and hopefully that data base is connected now so the dead doctors can’t continue their fraudulent activities.  BD

Technology will hopefully be able to nip some of this activity before it starts, a healthcare IT challenge.  BD 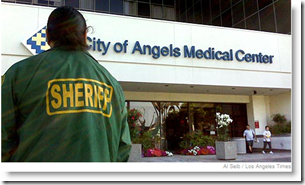 Desperate hospitals taking desperate measures, with none of this being legal and lead a couple arrests with more to come. Empty beds cost hospitals money, so was this an attempt to fill the beds or fill some pockets.   Over 50% of the hospitals in the US border on insolvency.  Whether or not that had any impact here on the motivation is not known yet, but the overall shape of our hospitals today in the US is not good.

Two hospital executives have been indicted for allegedly paying homeless people for unnecessary medical treatment as part of an ongoing investigation into a scheme to bilk government health programs out of millions of dollars.
Robert Bourseau, 74, who was chairman of City of Angels Medical Center, was arrested at his Los Angeles home Friday by federal investigators. Dante Nicholson, the hospital's former senior vice president, is scheduled to appear before a federal judge next month.

Hospitals Across the Nation are Sending Fraudulent Charges - WhistleBlower gets Reward