CCHIT – One physician’s opinion and My 2 cents

I have written quite a bit about the topic as well.  I do agree we need to have certification that the software will perform as sold, no doubt and that’s like getting the UL approval for electrical devices in short, but the fees and money involved have been the big issue.  Smaller EHR/EMR companies have not been able to compete, thus there are many available products that have no official certification from the committee.

To be fair, and especially since money is so tight right now, the cost should be adjusted for all to have a fair chance, as well as the members being non partisan as well, so the politics are not an issue.  All we want as patients and doctors are systems that will work and get the job done.  In order for hospitals to help physicians with the financial part of it, the supported EHR products need to be certified.

Also, now that we are in heavy with Web 2.0, which covers the PHRs (personal health records) that part of the game has changed a bit as well, and with the use of many vendors, it could take a real long time to certify online records programs that automate the processes to exchange and import data, example of one would be a device that plugs in to your pc to input your blood pressure from the device.  In other words, how far does certification go or will go?

One thing for hospital systems though that I believe everyone would like, is the same user interface, the screens, no matter what system you have, same or similar screens for the clinical side and data input would be one big relief. One MD told me he had to learn 5 different systems to 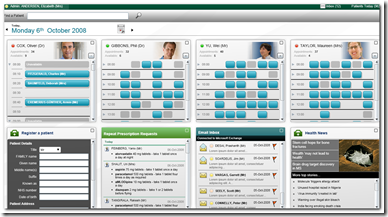 complete his residency.  Think of the physician who is on staff with more than one hospital and you have the same thing, and we want doctors who can diagnose and treat and a user friendly system so that data entry is not an obstacle.

This is becoming much more important as we have “mobile” healthcare workers, nurses working from a registry who have to learn many systems, surgeons who work at several hospitals too, so it’s more than just the doctors, it entails many healthcare workers having to learn too many systems and that in itself can be a potential culprit to errors.

I wouldn’t mind having the CCHIT committee certify an interface to standards to make it easier for healthcare individuals to spend more time with patients and not on learning several software systems and this way healthcare individuals could function at any hospital without a huge learning curve, especially in the case of emergencies where time is of the essence if one is functioning outside their normal parameters.  BD

One good reason why the Common User Interface makes sense, it’s free and open for anyone to develop and has some real dynamic screens with Silverlight to make navigation simple and easy.  Would be nice for at least the basics to be located in the same place in every hospital.  BD

Under the federal government's direction, the Certification Commission for Healthcare Information Technology has been given the task of promoting information technology within the healthcare industry. Approximately half of CCHIT's board of directors work for medical insurance companies or commercial medical informatic companies, or are physicians employed by very large group practices or electronic

health-record companies. As a result, CCHIT's priorities have been tailored to reflect the interests of its board, rather than the needs of the physicians and the health interests of our society at large.

CCHIT is now attempting to coerce physicians to purchase specific, expensive and "CCHIT-certified" EHR systems, which are designed to collect medical information. This information is "quantified"—thereby creating a huge repository of all U.S. healthcare interactions. As 16% of the U.S. gross domestic product is spent on healthcare, the amount of information that will be stored in these databases is massive and will eventually be available (for sale) to third parties. One can logically conclude that organizations with access to this information will be able to exert a huge influence on the future of U.S. healthcare.

An inherent conflict of interest within CCHIT - Modern Healthcare

CCHIT Certification and HIE Transactions – The Process and What It Means