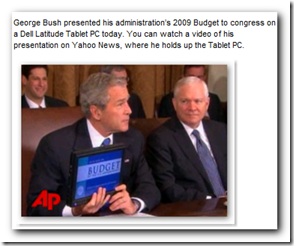 One thing for sure, who ever gets the job of the White House CTO is going to have one busy job getting everyone up to date.  Approved Gmail accounts for some so they could communicate.  Windows operating systems over 6 years old, well how old were the computers too?

Granted stealth type security is needed by all means, but it appears that nobody wanted to progress, and basically that tells the story of where we have been for the last number of years.  I remember the former president holding up a tablet pc with the “e-budget” but did not see any interaction at all which leads me to think that perhaps this was just an image on the screen to hold up for the press and pictures?

The White House is not alone by any means as we have had story after story this year about the FDA and their lack of technology and now stories about the SEC are arising.  It sounds like parts of the former White House and Healthcare had something in common with being a “low tech” business in some areas.  Thank goodness our  new President embraces technology and we will all begin moving forward from here.

There are some bright spots though and I like to refer back to a video done earlier this year by Senator Dr. Coburn who really lays it right out, operating like we did in the 50s.  The statement about the “missing letters” from the keyboards is not one that I can quite understand?  Our new President and staff definitely has their work cut out for them in more ways than one and it appears from day one they have been presented with some real challenges, perhaps some that could have been dealt with along the way, like updating some of the PCs and operating systems?  Oh well. Hopefully everyone will join in and we will no longer have to hear “It’s for those guys over there, I don’t do digital notes”.  BD

What does that mean in 21st-century terms? No Facebook to communicate with supporters. No outside e-mail log-ins. No instant messaging. Hard adjustments for a staff that helped sweep Obama to power through, among other things, relentless online social networking.

One member of the White House new-media team came to work on Tuesday, right after the swearing-in ceremony, only to discover that it was impossible to know which programs could be updated, or even which computers could be used for which purposes. The team members, accustomed to working on Macintoshes, found computers outfitted with six-year-old versions of Microsoft software. Laptops were scarce, assigned to only a few people in the West Wing. The team was left struggling to put closed captions on online videos.

One White House official, who arrived breathless yesterday after being held up at the exterior gate, found he had no computer or telephone number. Recently called back from overseas duty, he ended up using his foreign cellphone.

Several people tried to route their e-mails through personal accounts.

But there were no missing letters from the computer keyboards, as Bush officials had complained of during their transition in 2001.

And officials in the press office were prepared: In addition to having their own cell phones, they set up Gmail accounts, with approval from the White House counsel, so they could send information in more than one way.

An e-Budget - Bush and a Tablet PC