Well I happen to have one of those I wrote and sold 6-7 years ago, the EMR Data Base.  Those were the days when Office 2000 was still the norm and the new version was still in beta at the start of the project.  During these times, the systems only connected internally too with no integration as Web 2.0 didn’t even 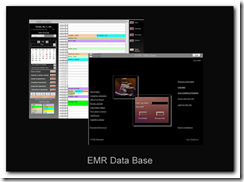 HL7 standards were in the early days and things were moving along quickly in those areas with EMR systems working to integrate.  Things were also a lot simpler then and a single programmer had a lot less to worry about and deal with.  I wrote in VB 6, and even back then I was determined not to create an “old gray slug” of a program, in other words the boring gray VB programs that were all over the place.  By today’s standards there are very few of those left as most applications have moved on to Dot Net or other programs.  Also at the time MS Access was still very popular as a back end to store the data as SQL server was still being developed, and is one of the big choices today for storing secure data.

First of all I had a Scheduler with the ability to import and export to Outlook.  After having put the modules in VB, I later changed the front end as it was being developed and moved it in to MS Access to make the update process faster and simpler with my beta office.  Notice, no gray slug here. Most offices all wanted to purchase or already had several licenses of MS Office so that was not an issue. 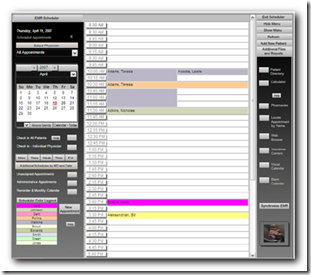 The Daily Schedule could be printed out to look like this. 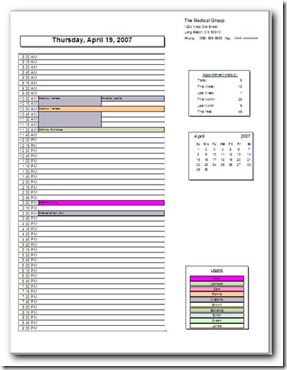 Overall Calendar that opened the appointment by clicking on the name. 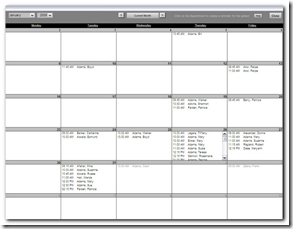 It ran and worked well with Tablet PCs later. 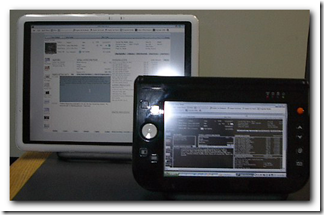 You could change color schemes.  There were 4 modules, the EMR charts, the Schedule, a Document manager and a Lab Module.  Security was done too by module, for an office worker, they only had the Scheduler and Document manager installed for a simple example at their work station. 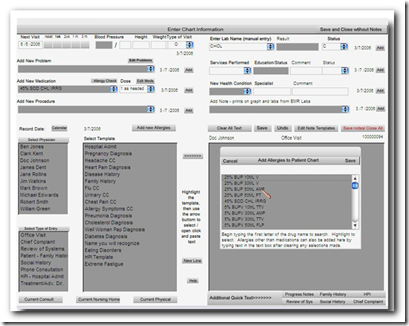 Automated referral generated from the program complete with ICD and CPT codes for the recipient MD. 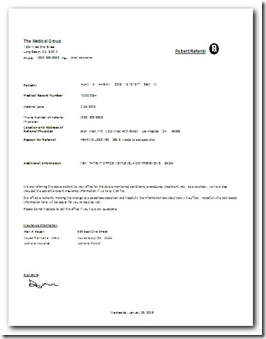 Had a graphic charting section.  Navigation was done on the left hand side. 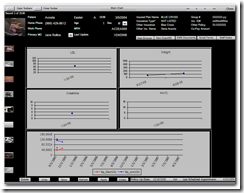 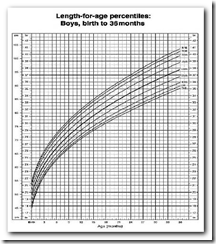 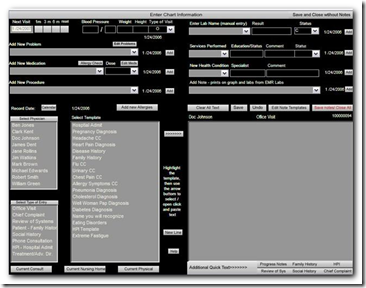 Customization Screen for the EMR. 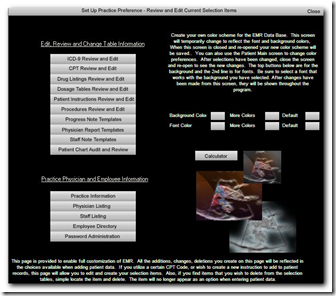 Audit Table screen to modifications to a record were visible as to who and when data was changed. 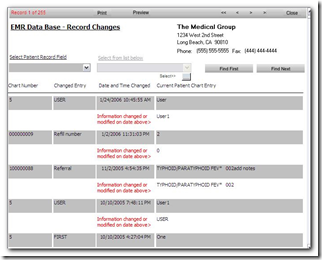 Patient Chart in another color. 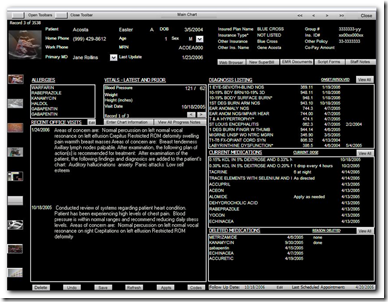 The chart even had a browser so you didn’t need to leave the chart to go to the web.  Patient information was right on top. 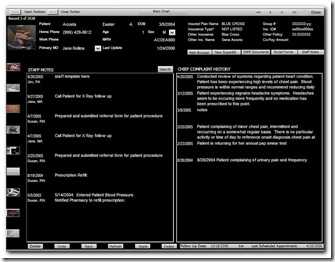 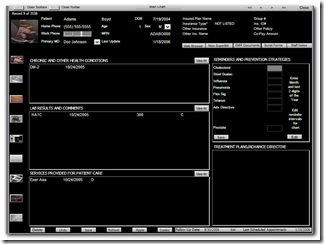 It did prescriptions via an internet faxing service. 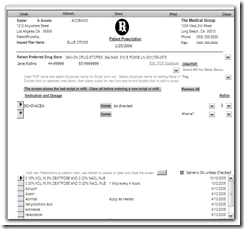 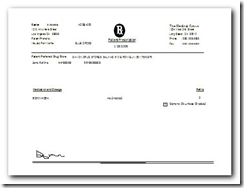 Patient handout with information on graphs. 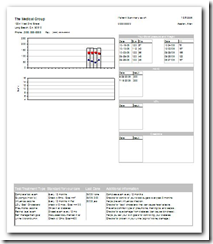 Had Customized IPA forms to be faxed, this was before many were online, information came right out of the chart. 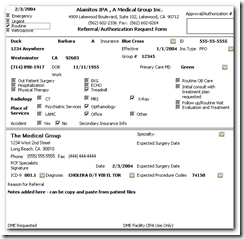 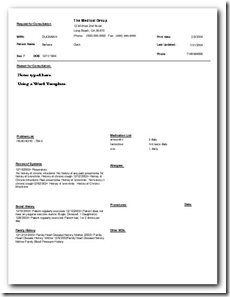 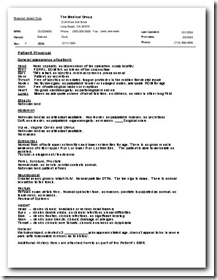 Connected to the labs… 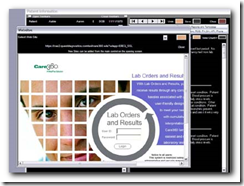 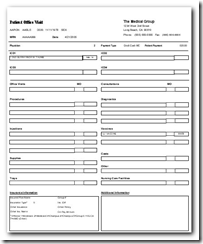 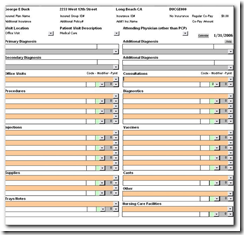 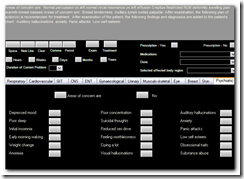 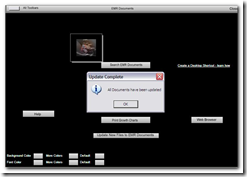 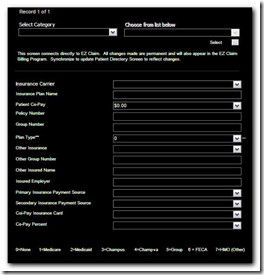 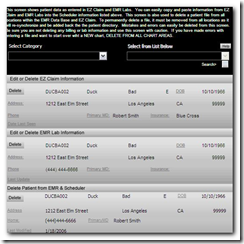 Opening Screen for the charts 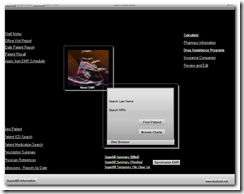 Anyway, these are a few screenshots of the program I wrote years ago and some of the basics have not changed.  Perhaps this might offer a little insight sometimes too in to how I look at things, from both a patient and coder at times.

Of course, i could not have done this without working with a family practice in Long Beach who was my partner on the entire endeavor.  Remember back then there were not too many EMR vendors out there as well.  It is totally changed by today’s standards and there is no way one individual programmer can keep up with updates, etc.  It takes a team.

I decided too I would like to see the light of day again too, to thus I changed gears and retired the program and began consulting; however, having had the experience of writing a program of such, it gives me great insight as to how things and other systems work today.  I still attend Microsoft events and keep updated on the architecture and how things together today, and may play around and write a sample bit of code to make sure I can still do it.  Did a small Silverlight application that will never see the light of day, but simple and making sure I knew how to work with and connect to SQL Server with the new LINQ language from Microsoft that is used with Silverlight.

Anyway, I hope this has not been too boring, but maybe a glimpse in to the past and to show even years ago, everything didn’t have to be a “gray slug” when it came to software.  This was quite a challenge for me in it’s time after having been an outside sales executive for over 20 years too, so there are days when I think code and others when I think normal:)