This is a good article from Scientific American who has done a great job on researching “bird abatement”.  This has been a long ongoing project and many migratory birds are protected species as well, but we just don’t necessarily want them hanging around the airports.

I also thought I would include an incident here from a few years past with a Delta airline pilot in Houston, an acquaintance, who experienced the bird rush as well and how the flight crew was able to bring the jet in for a safe landing as well.  One other item of note here, relative to Twitter, you do get smarter when reading and contributing.  Scientific American had posted the question, what do we do about bird strikes?  I had my digital files from the past and here’s a link to what the Airline Pilot’s Association was doing and their recommendations, which  Scientific American has included as a link in their coverage.

Here’s a small insert from the ALPA report below:

Colliding at 130 knots, a 4-pound bird (for example, an adult great black-backed gull) hits an aircraft with more than 2 tons of force, concentrated in a small area. At 260 knots, the same bird delivers a 9-ton punch.

The flight crew instantly found themselves in an airplane that was vibrating intensely and had lost all power in one of its three engines. F/O Hebner's cockpit instruments had failed, and the noise in the cockpit was deafening. The crew worked as a team to return the crippled airplane to IAH without injuries to themselves or their passengers. Their outstanding performance earned them the ALPA Superior Airmanship Award (see "ALPA Annual Air Safety Awards Banquet," September 1999).

Post-flight inspection confirmed that the bird strikes had extensively damaged the B-727; the radome was destroyed, the left and center engines had to be replaced, and the right wing and other parts of the airplane were badly damaged.

Here’s a copy of the newspaper article from the San Diego paper about the Bruce Harris and the Delta flight. 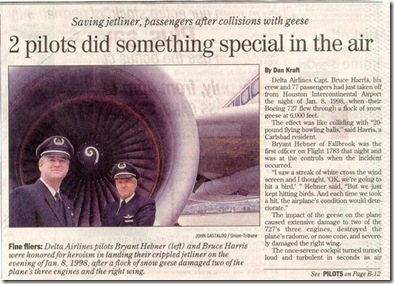 It was a number of years ago, and I had the opportunity to try my skills in an Airbus flight simulator and as an invited guest that had only text book knowledge, it was a learning and fun experience for me, but I walked away with some real appreciation and knowledge on how the simulators work and how the training pilots receive is so very important to allow a quick and almost automated response.  Being a geek, I was in total awe in seeing how elaborate the entire simulator setup was from the computerized brain center programmed by the technicians all the way down to the simulated cockpits themselves.

Another acquaintance of mine had a situation a number of years ago with a total left wing flap failure on the approach to Hong Kong with Flying Tigers, which is now FedEx, and the crew was able to land the 747, avoiding the most potentially largest killing plane crash in history, if you can imagine a 747 dropping down on the city of Hong Kong, it would have been devastating.

While in the simulator I tried to recreate the same scenario in Hong Kong, and as a complete novice, I crashed every time, but ok as it was only a simulator.  The scene in the cockpit, from his account, was total chaos as they thought they were going to be the first 747 to land in the water, but through all the gyrations and compensating for a landing, they were able to get to the runway, a miracle, and then were looking at hangars at the end of the runway and nobody knew if the plane was going to be able to stop, again no flaps on one wing, but it did and out when the ropes from the cockpit to bail out while all the tires blew! It was split second monitoring of the gauges that allowed for immediate action, as it was noticed the second it happened, and in these situations, every second counts.

Things have changed by today’s standards and the flight crew from Flying Tigers had their normal layover time and went out and flew their next schedule just less than a day later.  It took a while for the entire scenario to really hit a few days later as to what had occurred.

This also says something too for the use of simulators as well with health care, there’s a lot to be said for practice and simulation.  Perhaps something to give some real thought too as we all learn from one another.  Below are a few links to posts I have covered on simulation used in healthcare.

Medical students train on patient who feels no pain

In addition to the ALPA award there’s also another award given for acts of courage, which is from the Fraternal Order of Daedalians and you can read more here and find the awards for the Civil Airmanship listings and you will find both discussed above listed.  The flight crew on the US Airways flight is definitely a hands down winner I believe for this award as well.

In summary, the entire flight crew of US Airways are the heroes and their efforts will and should be long time remembered by all of us.  When under the gun and having to make quick decisions, every second counts!