“Alarm Fatigue”–Monitors at the Hospital That Sometimes Are Not Heard

If you have been in a hospital lately then you may be aware of all the noise that occurs when multiple alarms go off.  If you have been a patient then you know what they are too and are we suffering from alarm overload?  Each device seems 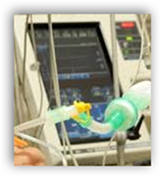 to have it’s own tone and system and at times when multiple alarms from multiple patients go off, something may get missed.  Sometimes there’s equipment that malfunctions often enough and send out false positives and when a piece of equipment does this often enough then one has a tendency to perhaps tune some of it out to where clinical staff becomes desensitized.

Sometimes they fall off the patient or they are not turned on or programmed properly.  I don’t believe any alarms are ignored on purpose but there have been documented cases to where nobody can remember either hearing an alarm when there was a need to respond.  Ventilators are at the top of the list for obvious reasons and it is still recommended to actually walk and look in on the patient.  Is putting a camera in each room perhaps the next step?  BD

They call it “alarm fatigue.’’ Monitors help save lives, by alerting doctors and nurses that a patient is — or soon could be — in trouble. But with the use of monitors rising, their beeps can become so relentless, and false alarms so numerous, that nurses become desensitized — sometimes leaving patients to die without anyone rushing to their bedside. On a 15-bed unit at Johns Hopkins Hospital in Baltimore, staff documented an average of 942 alarms per day — about 1 critical alarm every 90 seconds.

In some cases, busy nurses have not heard or ignored alarms warning of failing batteries or other problems not considered life-threatening. But even the highest-level crisis alarms, which are typically faster and higher-pitched, can go unheeded. At one undisclosed US hospital last year, manufacturer Philips Healthcare, based in Andover, found that one of its cardiac monitors blared at least 19 dangerous-arrhythmia alarms over nearly two hours but that staff, for unexplained reasons, temporarily silenced them at the central nursing station without “providing therapy warranted for this patient.’’ The patient died, according to Philips’s report to federal officials.

“Yes, this is real, and, yes, it’s getting worse,’’ said Carol Conley, chief nursing officer for Southcoast Health System, which includes Tobey Hospital. “We want to keep our patients safe and take advantage of all the technology. The unintended consequence is that we have a very over-stimulated environment.’’