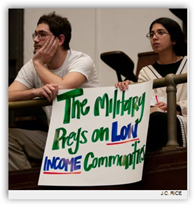 possibilities.  Decisions can be made and voted upon but where does rudeness and lack of respect have to enter this picture?  The last time it was turned down was due to “don’t ask don’t tell” but that is gone now and again a vote can be taken but the showing in front of a purple heart veteran as it was should have never taken place like this.

After spending 2 years at Walter Reed recovering, regardless of the upcoming vote, a little respect and manners should have been exercised and one has to ask is this what students are learning out there from adult behaviors they see?  That’s a good one to give some serious thought to.  BD

Columbia University students heckled a war hero during a town-hall meeting on whether ROTC should be allowed back on campus.

"Racist!" some students yelled at Anthony Maschek, a Columbia freshman and former Army staff sergeant awarded the Purple Heart after being shot 11 times in a firefight in northern Iraq in February 2008. Others hissed and booed the veteran.

Maschek, 28, had bravely stepped up to the mike Tuesday at the meeting to issue an impassioned challenge to fellow students on their perceptions of the military.