Whether you are in a union, or have never been in a union, if collective bargaining were to go away, you will not like it on either side if you are in the middle class in America.  Everyone wonders why doctors never get together and speak up much, 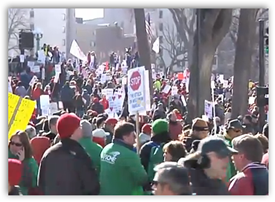 well they are today here in Wisconsin.  We all know that concessions are being negotiated (key word here) all over the US in various states and there’s no reason why this should not be able to take place here WITHOUT removing the ability for collective bargaining, as that is what this is all about.

As we are seeing big corporations moving further and further into control with less wealth being created even with venture capital today and only seem to be taking more of what we have, middle class America needs this ability to negotiate.  If the pendulum spins too far back in the other direction would we want to become laborers that were jumping out of windows of factories (like what happed in China with the production of Apple products) due to such poor working conditions and management?  Think about that and why we need collective bargaining.  Before myself and anyone who is reading this was born, working conditions were so bad in the US that collective bargaining and unions were created so I don’t think we want to repeat history in that vane.  The governor can’t be recalled until he has one year in office so there’s a time frame there but already people feel betrayed and rightly so as the 2 sides should be able to sit down and negotiate and not have this power struggle for big corporate America taking place.

As I have read today, the unions are encouraging teachers to go back to work and the State Legislators remain at large.  It was amazing to see videos of the highway patrol going to their houses looking for them.  Again, think about this and was that necessary too?  So the doctors did make their point of support, after all they are at the top of the ladder in the human business and we depend on them.  BD 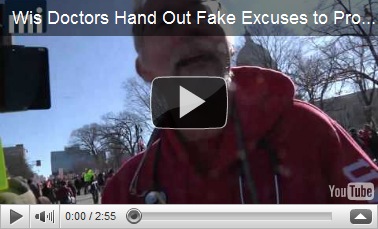 With the thousands of public employees on the streets of Madison for days now, schools and other services have been closed.

Some are concerned what may happen to them when they actually decide to go back to work.

Physicians have set up on street corners giving out doctor’s excuses to protesters as part of the protest against Governor Scott Walker.