A man receives a transplant, but also keeps his own existing heart.  This is not performed very often but in this case it saved the man having to go under a second

The 2 hearts are attached to each other and work together.  The patient could have had a ventricular assist device as a secondary option.  Removing the existing heart with a straight transplant too was not an option as he had what is called pulmonary hypertension.  The operation performed is safe and the current survival rate is around 10 years.  BD 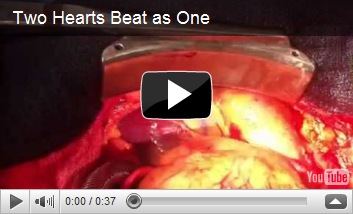 This Valentine's Day, Tyson Smith woke up with a brand new outlook and two beating hearts — his old failing heart and a newly transplanted heart. "I can tell that I am getting stronger every day," said Smith.

The team from the UC San Diego Center for Transplantation performed a rare, life-saving cardiac surgery called heterotopic heart transplantation, where Smith's own heart remained in place while a second donor heart was implanted. He now has two beating hearts.

This Valentine's Day, Tyson Smith woke up with a brand new outlook and two beating hearts — his old failing heart and a newly transplanted heart. "I can tell that I am getting stronger every day," said Smith.

"Even though Mr. Smith was facing death, he could not have a standard heart transplant. Removing the old heart and replacing it with a new heart would have caused the new heart to fail, because resistance to flow in his lungs — called pulmonary hypertension — was so high," explained Dr. Michael Madani, associate professor of surgery and co-director of UC San Diego Sulpizio Cardiovascular Center. "But together, the two hearts share the work and get the job done."

"Mr. Smith had two options: a mechanical left ventricular assist device (LVAD), which would replace the function of his left heart and allow him to then go on to a standard heart transplant in a few months; or the so called "piggy back" transplant, which replaces the patient's left heart and allows the patient's right heart to continue the right-sided pumping through the lungs," said Copeland. "This way, Mr. Smith needed only one operation rather than two, which saves the patient time, inconvenience and pain, and reduces medical costs."