If you read here often enough at the Medical Quack occasionally I go back and take a look to see how updated some of these listings are.  They all seems to have removed the listing for my former obgyn that was on all the data bases back

in September of 2010, and she has been deceased for around 8 years.  I still also wonder about how accurate these sites are and if they somewhat all use the same data base.  For a little history you can visit and see what I found just a few months ago.

I advise all to use these locations websites lightly and realize that all the information you seek may not be up to date.  Perhaps the NY Times felt it was easier not to have to maintain this data base as it changes frequently as what happens with doctors changes as they

move, retired and so on.  As mentioned below MDxMedical is the parent company of Vitals and I did some checking around on the oncologist who was all over the national news with Medicare and health insurance fraud, who’s sentencing was just postponed until June of this year and he’s still listed, even though he admitted fraud and patients reported did not get the cancer medicine he billed for.  Patients have added a few comments so you be the judge here.  Both Vitals and UCompareHealthcare have almost the same information on their websites.  Back in December I took another look and you can read more about a few other sides at this post. 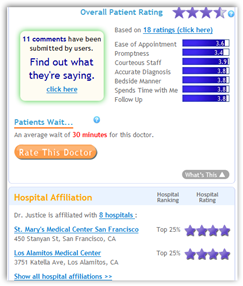 Also look for the hospitals where doctors as associated at the screenshot shows Dr. Justice affiliated with a hospital in northern California, which he may well be, but I ran across several doctors who emailed me and commented on how many of the sites had them listed with hospital affiliations to where they had never set foot in.

I did find the doctor who died in a chimney last year still listed on both sites and Vitals at least put a link to the story but still has her listed.  Be prepared as you may find “dead” and “retired” doctors still listed. 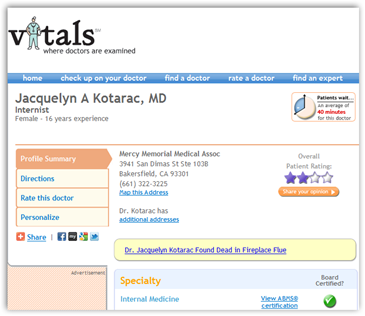 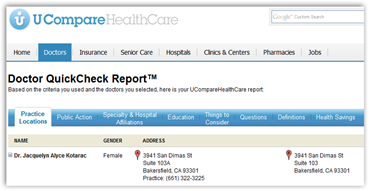 Most of the sites have links of course to sell you something too so many are ad supported so again, everything you find on these sites may not be accurate and up to date.  Actually I had several doctors compare their listings on the commercial sties compared to the MD listing on the HHS government site and

they found Medicare.Gov a bit more accurate, perhaps lacking details, which are to be added as I understand on the next round, but you can find information here that only Medicare has, and again from the feedback I received, there were fewer dead and retired doctors and the information that has been included appeared to be more accurate.

I did a little explaining to one of the writers on Forbes too as everyone somewhat attacked the levels of information included, when in fact when you look at the commercial sties, it’s just as bad if not worse, so don’t discount the Medicare.Gov site when it comes to looking up doctors.  I won’t comment on the ratings done here, as that’s another story with it’s own issues.

I guess we can wait and see if they combine data resources here and improve what is out there for the consumer.  The accuracy here is actually an important issue as those committing fraud also mine the web for NPI numbers and can connect outdated information to a potential physician they could bill against, and with outdated insurance carriers listed, that could give them some areas to pursue fraudulent billing.  Hopefully the “no pay” listing from the government is forthcoming and I would guess that some of these types of listings would be included.

In another opinion piece Dow Jones thought it would be easy to have a company list what doctors were paid by Medicare and I took exception to that based on what I see here with listings from private firms, it’s not as easy as it looks and would not

serve any real purpose, and all police agencies though should always have access.  Right now though the Dow might be more concerned with what’s happening with the exchanges though based on recent news instead of what I called somewhat of a useless lawsuit.  BD

“Combined, the UCompare and Vitals.com Web sites are visited more than 100 million times annually by patients. They use the sites to make more informed and intelligent decisions about their doctors, hospitals and other health care facilities,” Mitch Rothschild, CEO of MDx Medical, said in a statement. “With this acquisition, we’ll have the scale to make health care access simpler and more transparent for the consumer-patient. We’ll be introducing powerful Web-based and mobile applications so patients can access better quality care more conveniently.”