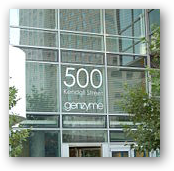 rejections and now it appears it has finally resolved and Genzyme will be purchased by Sanofi.  This is a huge price tag at $20 Billion.  You may or may not be familiar with Genzyme but back in 2009 they were in the news over a real virus in the plant and the link below has a little history.  Fabrazyme and Cerezyme, drugs for two rare genetic disorders.  Genzyme is the sole supplier of the medicines in the United States.

Genzyme in addition to the drugs mentioned above is also involved in creating biosimilar drugs, the biotech equivalent of generic drugs, and with the current

economic conditions, biosimilar drugs due to the price savings they offer are going to become very popular with their development.  LabCorp Holdings bought the genetic testing business Genzyme Corp. for $925 million in September of 2010.

This is the largest biotech acquisition on record and no doubt some consolidation may take place with employees.  Genzyme as mentioned above is the leader with drugs created to treat rare diseases.  BD

It’s been a long time coming, but the sale of Genzyme, the Cambridge, MA-based biotech company, to pharma giant Sanofi-Aventis for $20.1 billion marks a landmark moment in the biotech industry here in Boston and beyond. The deal puts Genzyme, the largest biotech company in Massachusetts, and the fate of 10,000 employees in new hands after a nearly 30-year run as an independent firm.

The deal, valued at $74 a share, is the biggest biotech acquisition ever in Boston’s biotech cluster, and one of the largest ever in the industry. The biggest came in March 2009 when Roche paid $46.8 billion to acquire the remaining 44 percent stake of South San Francisco-based Genentech that it didn’t already own.

Now begins the game of watching what happens to Genzyme under the stewardship of Sanofi and the drug giant’s chief executive, Chris Viehbacher. There’s little doubt that some number of Genzyme employees won’t stay for various reasons as the companies integrate. Genzyme now employs 4,500 workers in Massachusetts, more than twice as many workers as the state’s next-largest biotech firm, Weston, MA-based Biogen Idec (NASDAQ:BIIB). Sanofi, whose blockbuster sleeping drug zolpidem (Ambien) has entered the lexicon of pop culture, is buying Genzyme as it seeks to revamp its product offerings as generic drug competition chews into sales of brand-name medicines that are losing patent protection.

Genzyme, After Months of Holding Out, Agrees to be Sold to Sanofi-Aventis for $20.1B | Xconomy