When you think of it, this is not a bad idea for the folks in Congress to have instant

answers.  I read somewhere that on Jeopardy that Watson was not connected to the internet; however with a connection it could prove very useful during debates to have “instant statistics” or instant news to refer to.  It could be hooked up to a big screen so everybody sees the same thing.  Watson consists of 90 servers and the video below talks about some of the algorithms used to make it perform on television but this is only part of what it can do.  Here we go, back to that word once more, the algorithms. 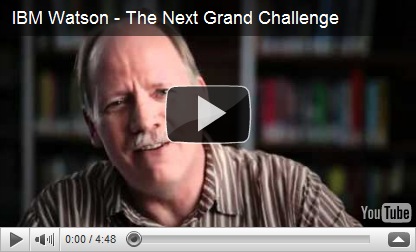 Meta knowledge in an instant is what Congress needs to make laws that are applicable to today’s world that govern current day technologies to include healthcare.  It has a local search algorithm, which indicates when further searching is unlikely to yield a better result ,when to quit computing and give an answer – because you can always crunch more data.  This could be useful for asking questions of data bases and data sets that have maybe not been asked before.  Can you imagine how much more intelligent

this could make our lawmakers and provide some instant answers and search results?  I think it’s a good deal, especially when they begin talking healthcare laws and reform as it might help keep things on track just as long as Watson doesn’t develop any bad habits as it learns too so no learning how to conducted a filibuster <grin>.  Watson could be their mathematical Algo Man that they all need so desperately for accurate information and data and interpretation will probably continue to an issue but at least perhaps the debates could grow to be more intelligent in nature.

Even Larry Ellison made a statement about wanting to be TJ Watson not too long ago and/or compete.  The founder of IBM was named Thomas J. Watson.

More speech recognition features too are on the way.  BD

IBM and Nuance to Work on “Watson” (The Distant Cousin of Dr. Watson) Perhaps Affordable Technology for Use In Healthcare If Private Equity Investors Stay Out Of It

The TV game show Jeopardy! experimented this week with IBM's latest version of

Could Watson be coming next for our jobs in radiology or the law?

Computer programmer and writer Martin Ford says he sees a future where artificial intelligence will take over many high-paying knowledge professions. He uses the example of radiology.