The approval process too has been hit by economics. Due to the money needed to be spent for FDA approval, some companies simply don’t have the money to go through the approval process, depending on how long, trials, etc. are required.  Device companies in the US are finding that approvals in Europe are moving along much faster and a study looking at recalls didn’t show much difference in the rates and numbers.

One company’s quest is listed below that closed down in the US as the money needed could not be substantiated to keep going.  Venture Capital investments have changed quite a bit too as we don’t seem to be seeing new wealth being created either but rather a continued re-distribution in some circumstances.  With the economic changes the world is going through, investing has changed too and the opportunities and commitments have dwindled.

When I look at the craziness of all the money being invested in social networks, an intangible, versus the growth of medical devices and drugs, I myself ask, what is going on?  How much are those algorithms worth versus drugs and devices that stand to save lives?

We have lost out balance here in where “true” value really lies and I don’t mean to say that social networks should be canned by any means as they do have value and help quite a bit, but the scale is tipped way too far in that direction.  Social networks are disruptive and to a degree some of this is good, but when you see major banks investing and rolling money on these intangibles that are not much more than algorithms and servers storing data, you do wonder where we are headed.

Banks do it because they see the value that the public and others have placed here but sadly the entire scenario it is creating hurts us in the long run.  Our device 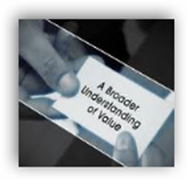 companies and pharma look overseas for new life saving device clearance while we sit around and play games on Facebook and chat about things that go nowhere.  Again, I’m not discounting social networks but when you bring the valuation in here it’s a big problem and would you not like to see some of this money going toward research and development instead of the next game that will soak up all your time and keep you distracted from education?

The sad reality that we have misplaced values is harboring all around us as we don’t seem to be smart enough to see the light at the end of the hall, and in the meantime, the medical companies creating tangibles that we need to save lives and live better healthy lives, continues to leave the US.

Frankly I could do with a few less over priced social algorithms if it would lead to more healthcare devices and drugs made here in the US, as this would also stand to help regain what we have lost economically, but until all are educated on the social network value game, we continue to see the nonsense over inflated value here. I could live fine without a social connection on the web, but if I needed a life saving drug or device, the same would not be true.

Imagine some of the money spent in all the social algorithms being used in healthcare, we could look at accomplishing a lot and fully fund the FDA to get their processes rolling with a commitment with better factual information and a stronger decision making process.

When the next phase of algorithms comes along for social use and huge bankrolls behind it and the old kind of fade away, (My Space for one example) we are still left with lacking jobs, devices and drugs here in the US, so we have accomplished little and the opportunities keep rolling overseas.  BD

Late last year, Biosensors International, a medical device company, shut down its operation in Southern California, which had once housed 90 people, including the company’s top executives and researchers.

The reason, executives say, was that it would take too long to get its new cardiac stent approved by the Food and Drug Administration.

“It’s available all over the world, including Mexico and Canada, but not in the United States,” said the chief executive, Jeffrey B. Jump, an American who runs the company from Switzerland. “We decided, let’s spend our money in China, Brazil, India, Europe.”

Marti Conger, a business consultant in Benicia, Calif., already has. She went to England in October 2009 to get an implant of a new artificial disk for her spine developed by Spinal Kinetics of Sunnyvale, Calif.

Some companies and investors are even contemplating forgoing the American market completely.

The company began working with both the F.D.A. and European regulators in early 2005. It won approval in Europe in 2007 after testing its device in 30 patients and spending $4 million. Since then, thousands of the disks have been implanted.

Only last May did it receive approval for a final trial for F.D.A. approval that would involve about 250 patients. But hard-pressed investors are not willing for now to put up the $50 million or so the trial would cost, Mr. Starling said.