The incidents were reported between October 1st and November 15th.  All were female patients between the ages of 20 and 32.  Computerized records were 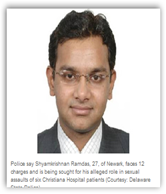 audited that lead to identifying the resident.  See electronic records are good for unfortunate occurrences such as this in nailing down the history.  He was in the charts digging around of the six victims and performed physical exams, didn’t document in the charts.

Three of the victims were not under his area of jurisdiction, being “non teaching” patients so he had no reason to be in the charts.  The Attorney General and the Healthcare system are looking for him and there’s information at the bottom of the post on how to report any tips.  I hope they find him and again when accessing sophisticated medical record systems today, there’s usually always an audit trail and hopefully the medical records are leading authorities in the right direction here to capture this former resident.  Taking off and being on the run doesn’t seem to be a very good indicator here.  BD

NEWARK, Del. - Delaware State Police are trying to find a former first-year resident at Christiana Hospital who they have identified as a suspect in the alleged sexual assaults of six patients.

According to state police, Shyamkrishnan Ramdas, 27, of Newark, has been charged with six counts each of third-degree unlawful sexual contact and abuse, mistreatment or neglect of a patient or resident of a facility.

Warrants have been issued for Ramdas, but his whereabouts are unknown at this time, as he is no longer employed by health system, police said.

Anyone who knows Ramdas' whereabouts or has any information about the incidents is asked to contact the Major Crimes Unit at Troop 2 by calling 302-834-2630. Or, call Delaware Crime Stoppers at 1-800-TIP-3333.

Information may also be provided online at www.tipsubmit.com , or send an anonymous tip by text to 274637 (CRIMES) using the keyword "DSP."