Aetna and United were awarded new contracts; however, Humana and HealthNet filed appeals and both Aetna and United lost the bids and they reverted back to the incumbent insurance carriers.  Back in May of 2010 it was announced that HealthNet would stay in place in the north as somehow it was determined that Aetna was considered to have “cheated” with a conflict of interest and now the appeal for Humana has been granted with United Healthcare having to give up their contract too.  Here’s a flashback on HealthNet below. 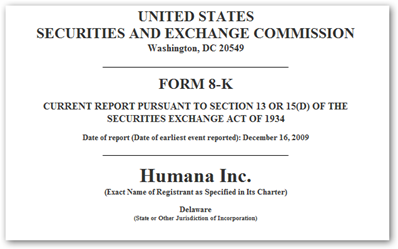 Here was the original announcement for United and Aetna.

It took the GAO quite a while to sort all this out too as back in January of 2010 the bids were still in limbo.  The original announcement of the bids took place in July of 2009.

This somewhat makes one wonder how difficult is the bidding process and did the other 2 cheat and how?  These of course are big contracts, over 23 billion for Humana, and HeatlhNet and Humana are small in size by comparison to United Healthcare and Aetna, so perhaps good news for both.  Is the administration of healthcare insurer contracts so complicated now that a bidding process can’t be correctly executed?  The GAO was there to crunch numbers and verify the results and it took a long time for the results to become published.  BD

LOUISVILLE, Ky. — Humana will continue providing health care to military members and their families in the South.

The company announced Friday that the Department of Defense re-evaluated an earlier decision to award the contract for Tricare health coverage to UnitedHealth. A congressional agency supported Humana's protest in late 2009.

The Pentagon said the contract's potential value is $23.5 billion over more than five years, The Courier-Journal reported.