BlackBerry’s are not dead, especially when you have a hospital system that has been using the mobile smart phones as part of their plan for a few years.  We have a lot of choices today and granted others such as the Iphone and Ipad are moving in

to a lot of new areas, but even with bringing in new devices it’s time to call the IT folks in and set up new security, etc.  BlackBerry is still considered a very secure form of communication and depending on the networking and services in place, it still could stand to be a preferred methodology.

I particularly like this video as it shows some real phone screens and samples of the information and format that are used on the smart phones.   Back in 2009 I spoke with Fraser Edward from BlackBerry and there’s some additional information at the link below on how they integrate with healthcare solutions with some still applicable and some of the information has been updated as happens with all mobile technologies today.  BD 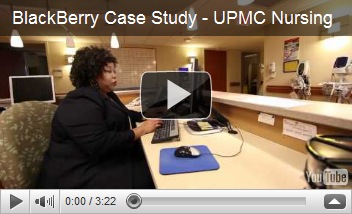 BlackBerry at the Hospital

Hospitals and medical centers are some of the many corporate environments in which BlackBerry smartphones are frequently deployed to help make staffers—in this case, doctors and nurses--more efficient and improve communication between them and their customers--patients. Since BlackBerrys are largely considered the most secure enterprise smartphones, government health agencies, hospitals and private medical groups often opt to issue BlackBerry smartphones to staff that regularly handle and sensitive personal information, such as patient health records.

The most interesting parts of the video, at least from my perspective, are when the nurses show the actual applications they employ, which all seem to be part of some custom software suite called "Smartroom." Those apps include "Smart Text," which lets users send secure text messages to all appropriate parties at once, so they don’t have to chase anyone down. And another "Transporter" app helps nurses ensure patients who are waiting for procedures make it to the appropriate hospital locations on time.