The study found that Americans trust their doctors, but do not trust EHRs largely.  According to a study to be released by CDW Healthcare in March, half of Americans believe that EHRs will have a negative impact on the privacy of their health data.  Thirty-five percent of respondents are worried that their information will end up widely available on the internet. 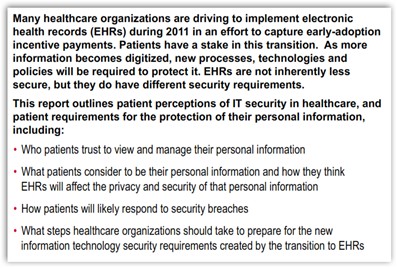 What was also kind of shaky to hear was the fact that 30 percent of doctor’s offices report that they lack basic anti-virus software and 34 percent report that they do not use network firewalls, yikes.  When you look at the chart below, according to the survey financial information along with personal ID are at the top of the list and below at 30% lower shows the importance of health information.  Health information is a concern but the financial and person IDs rate at the top. 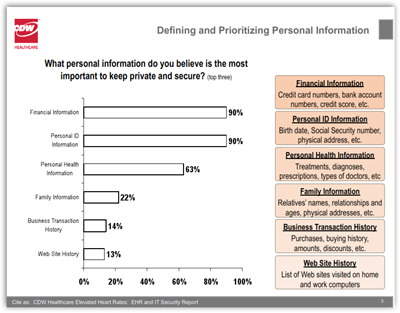 The next image shows who do consumers trust to maintain and make best use of personal health information, hands down it’s the doctor and I can’t believe a few actually said they would trust their insurance company. What’s up with those folks <grin>, they need to learn about the use and sale of aggregated patient data.

In other words what I interpret here is the human to human relationship still reigns and even with the all the gadgets and other information today you can’t the human bond, even though we get distracted and disrupted today, relationships matter. 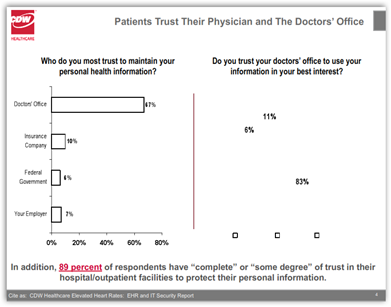 Now further down here consumers also feel that doctors and hospitals are responsible for protecting both financial and health data, and most could care less about business transactions and web site snooping and/or data mining.  In another year though that could change as mining personal data from the web grows and privacy matters are not what you might think they are at the time. 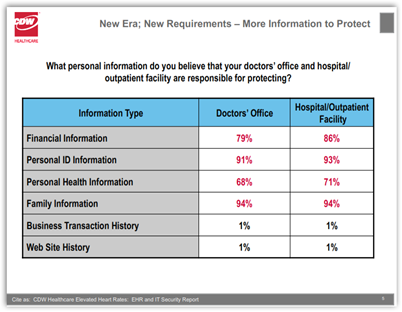 Now for some interesting numbers regarding security breaches.  There were 1000 consumers in the survey and half had been notified at one time or another of a potential security breach with their records!  That is not good and a big reason why security with data sets needs to be focus #1 today.  Even as innovation moves along the security needs to be there and there’s all kinds of software out there written by all types of programmers and sometimes new functionality and features added may not get a new look for security holes.  It happens all the time. 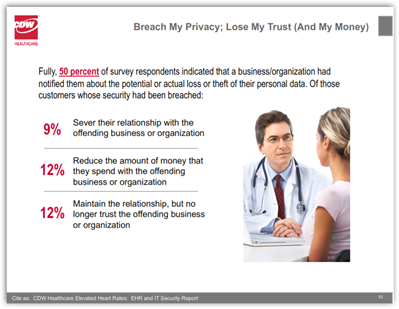 So in my opinion after reading this survey with 49% stating they believe that electronic medical records may cause harm and leave the door open for mistrust, I think it might be time to work on that end of things so consumers can be confident that their information is secure.  Consumers want their doctors and hospitals to be held accountable and this means the software and systems they use need to be secure and this is a group effort with awareness from the clinical side and also the performance from the vendors.  The full survey will be published next month by CDW with additional details and this is my take with an opportunity to review the survey and we all are consumers.  If you want to get a good idea of what consumers are afraid of, watch this 30 minute video which is a fictional story of a breach in Las Vegas, good stuff and it will answer some questions you may have and show the depths of how a breach can happen.  BD

Between January 24 and January 31, 2011 CDW Healthcare surveyed 1,000 adults in the United States about the security and privacy of their personal information

• Age and gender distribution of the sample population matches that of the overall U.S. population