“Ultrasound on a Smartphone” Technology From MobiSante Receives FDA Approval

videos so you can see how it works.  This is not a large expensive device and the size resembles a unit made by Signostics for an example with a device that resembles a phone in size, but is not a cell phone.   The advantage here of course is having a connected phone to send images as well without having to dock with a computer.


Windows Mobile Smart Phones on the Horizon for Imaging 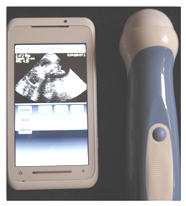 The only problem here is a little update needed to work on more current day devices as right now it works on a Toshiba Windows Mobile phone and not the new current operating system.

The price though compared to around $30k for some of the other devices is right on when one is looking at $7000 to $8000, a big difference.  Rural areas of the US are the first areas where they intend to begin marketing the product.  The product is using “off the shelf” software and simple enough to where non experts can use it to send images.

Redmond, WA-based Mobisante said today it has won FDA clearance to start selling its MobiUS system to healthcare professionals in the U.S. The startup, which began R&D work in 2007, will now race over the next several months to establish manufacturing protocols so it can deliver its new ultrasound imaging system in a way that will pass future

FDA audits, says CEO Sailesh Chutani.
The Mobisante ultrasound system will cost between $7,000 to $8,000 for the whole package—a Toshiba TG01 Windows Mobile smartphone, with ultrasound probe, and Mobisante’s proprietary software, Chutani says. The company hopes to cut that price in half over time, and is experimenting with leasing models to bring cost down even further, Chutani says. If that can be done, then Mobisante can start to dream much bigger about getting ultrasound into the hands of healthcare workers in remote

villages around the world, doing basic scans for internal bleeding, fetal health, and other common tasks. Such scans can only be done today on ultrasound systems that cost at least $20,000, and often more than $100,000—putting them far out of reach of the average front-line healthcare professional, even in the U.S.