Home » Medically Related » Other Items of Interest » Technology » DARPA spotlighting the Cars that Drive themselves...

DARPA spotlighting the Cars that Drive themselves...

Department of Defense is busy with many areas of development, outside of medical care as well...here's a simple search of some of the stories from the past, including the cars that drive themselves from last years competition...videos from the Stanford Intel car named "Junior"...that came in 2nd...BD

The biggest markets for remote-controlled vehicles today are farming and surface mining. But designers see the potential for such vehicles in military convoys and, eventually, even on our highways. 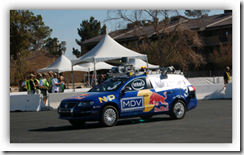 On April 11, the Defense Advanced Research Projects Agency spotlighted six top performers from the agency’s Urban Challenge competition that took place in November (GCN.com, Quickfind 1031). The vehicles showcased at the Pentagon included the winner, a 2007 Chevrolet Tahoe customized by a team of engineers at Carnegie Mellon University in Pittsburgh.

The Tahoe is loaded with radar- and laser-enabled sensors that collect data about the vehicle and its environment.

The data is processed by 10 2.16 GHz Intel Core 2 Duo blades, each running custom-written code capable of evaluating more than 1,000 objects per second. The computer bank sits in the rear of the vehicle and requires its own generator and cooling system.