Cell phones are becoming more popular by the minute, especially with medical imaging, nice story on the software and hardware process to send an image via a cell phone...good use for both rural and developing areas of the world...BD 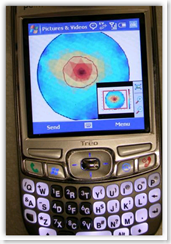 sophisticated radiological diagnoses and treatment to the majority of the world's population lacking access to such technology. This would include millions in developing nations as well as those in rural areas of developed countries who live considerable distances from modern medical centers.

Even when such equipment does exist in developing countries, it is often not in use because it is too sophisticated or in disrepair or because the health personnel are not trained to use it, said Rubinsky..

Utilizing commercially available parts, the research team built a simple data acquisition device for the experiment. The device had 32 stainless steel electrodes - half to inject the electrical current and the other half to measure the voltage - connected to a gel-filled container that simulated breast tissue with a tumor.