Pacemakers for the Brain - Depression Treatment...

VNS Therapy - we are all familiar with defibrillators, but for severe cases of depression there is also a similar technology...VNS can be utilized with Bipolar depression and others who have not

had success with normal drug treatment programs according to the article...the pacemaker turns itself on every few minutes to deliver a tiny electrical pulse...the treatment is normally added to a current medication plan....one side effect listed is the change in one's voice and diminishes over the time of around a year...somewhat makes me think of a very gradual lobotomy of sorts, but with anything relative to the brain we almost can't help but think about the old movie "One Flew over the Cuckoo's Nest"...visit the Cyberonics website for additional information and has obtained FDA approval for the device in 2005...Medtronics as well as St. Jude Medical are also involved in similar projects with brain pacemakers....BD 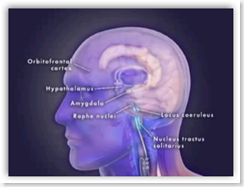 Devices implanted in the chest, with leads that send electrical impulses to parts of the brain, have already been approved to treat movement disorders, such as Parkinson's disease, essential tremor and dystonia. "These were severely depressed patients, the most depressed," Rezai said in an interview. The FDA in 2005 approved Cyberonics Inc. implantable device for treatment-resistant depression. It sends signals to the brain via the vagus nerve in the neck.