One more hospital gets the XBox....nice break for kids...as the hospital can be a a humdrum and perhaps boring experience for the young...and perhaps someday "Hospital Tycoon"will make it over to the XBox as well...BD

SEATTLE - Children who spend a lot of time in hospitals are there to focus on healing, but sometimes the doctor's order can include just having fun. 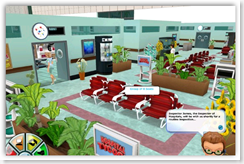 Patients at Seattle Children's Hospital are trying a new medicine: an Xbox 360.  Microsoft and a non profit organization called Companions in Courage have

teamed up to bring Xbox games to children's hospitals across the country.  Seattle Children's Hospital is among the first to launch the live network.

A hospital in California and New York launched the network with Seattle.  The goal is to bring the games to children's hospitals across the country.