This is actually a drop compared to last year but still a big chunk of money and you can read below it was not just Congress who was lobbied, CMS, HHS and the White House were in there too. Aetna has purchased several Health IT companies in the last year so this might add more fuel to the fire for marketing efforts as now 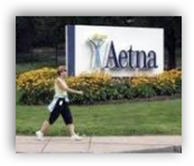 you have insurers who negotiate cheaper reimbursement contracts on claims now having a subsidiary coming in and offering algorithms and software services that require an addition expenditure to those (hospitals and doctors) who just suffered a decrease in payment, an opportunity to buy more analytics so they can help keep what’s left after the cuts.

Aetna is not the only insurer doing this as United Healthcare has also been even more aggressive with their purchases of subsidiary companies over the years and has been doing it a lot longer and sometimes even licenses and sells those IT capabilities to other insurers and you can maybe think back to the out of network Ingenix data base that Cuomo exposed a few years ago that lead to a big class action settlement with the AMA and doctors all across the US.  Here’s one example of an Aetna Health IT purchase below, in the HIE area here which in some areas competes with the non profit HIE program efforts.  BD

WASHINGTON - Managed care company Aetna Inc. trimmed its federal lobbying spending in the second quarter, as it focused on bills that shape parts of the health care overhaul, including one that asks the Supreme Court to expedite an appeal over its constitutionality.

The overhaul also imposes restrictions on insurers, and Aetna lobbied on one of those, a minimum medical-loss ratio that took effect this year.

The overhaul calls for insurers either to spend certain minimums of the premiums they collect on care and quality or to provide rebates to consumers. Aetna lobbied on a resolution expressing disapproval of that regulation and on a bill that would exclude broker compensation from the formula used to calculate those ratios.

Besides Congress and the White House, Aetna lobbied the Centers for Medicare and Medicaid Services and the Department of Health and Human Services.