This is getting interesting so say the least with this lawsuit.  The FDA cannot comment here but how this ends up with an interpretation will be one to watch. 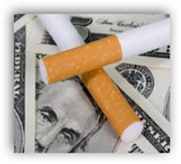 Granted the advertisement spots are doing the right thing to try to educate and bring reality around by all means, but is it violating free speech?

The tobacco companies say it is depressing consumers and the pictures are forcing them to “depress” you.  Four big manufacturers have joined forces for the lawsuit.  Maybe it all depends on whether or not the judge smokes for the interpretation <grin>?  BD

They said this violates their free speech rights under the First Amendment, according to a complaint filed Tuesday with the U.S. District Court in Washington, D.C.

"The notion that the government can require those who manufacture a lawful product to emblazon half of its package with pictures and words admittedly drafted to persuade the public not to purchase that product cannot withstand constitutional scrutiny," said Floyd Abrams, a prominent First Amendment specialist representing the cigarette makers, in a statement.