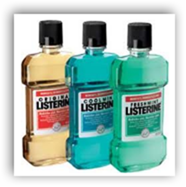 This appears to revolve around the complaint that mouthwash sales of Listerine would go down as it has been in the news that the alcohol content in mouthwashes could cause oral cancer.  One thing we know though is that Listerine doesn’t remove plaque as that was challenged last year so they can’t advertise that one anymore.  BD

A company that makes an oral cancer detection kit has launched a $60m lawsuit against Johnson & Johnson, claiming that the multinational prevented its product from being sold to protect its own Listerine mouthwash, which, along with other mouth rinses, has been linked to mouth cancer.

In a complaint filed in a New Jersey court, Oral Cancer Prevention International says the multinational's executives were "leery of highlighting" the risk of oral cancer if Listerine were to be sold alongside the detection kit, as the OCPI and a division of Johnson & Johnson had previously agreed.

In February last year OCPI signed a contract with OraPharma, then part of Johnson & Johnson, the healthcare product manufacturer, to sell the company's Oral CDx Brush Test. However, almost immediately it allegedly found its product sidelined by the sales team. Johnson & Johnson sold OraPharma to a private equity firm this year.

The OCPI product was a "Brush Test" that dentists could use to determine if a common oral spot contained abnormal cells that could develop into oral cancer.