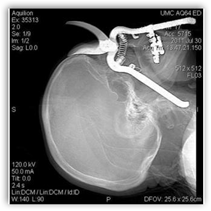 Half the the pruning shears were in his head!  Luckily he didn’t lose either of his eyes, but the x-ray is just dumb founding.  BD

Leroy Luetscher dropped a pair of pruning shears while working in his yard in Green Valley, south of Tucson, on July 30, the University Medical Center in Tucson said in a news release.

The shears landed in the ground point downward. When Luetscher bent down to pick them up, he overbalanced and fell face-down on the handle, which punched through his eye socket and went down into his neck.