It was just in July of this year that MMRGlobal (MyMedicalRecord.com) sold 4 million shares to a Chinese investment partner.  If you keep up with the news then you are aware of Russell Armstrong’s suicide and of course everyone knows Taylor 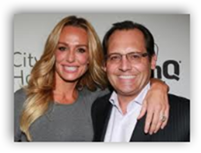 Russell from the Real Housewives show.

In 2008 MyMedicalRecords merged with another company that was patient-specific immunotherapies for the treatment of cancer, Favrille Biotech.  As of 2008 the company had not shown a profit yet.  When you read through the article the writer goes into a lot of detail but the bottom line is looking for the money for the MMR Global shareholders.

The board of advisors members kind includes Buzz Aldrin, Sugar Ray Leonard , a US Congressman Richard Gephardt (wonder if he uses the PHR).  Maybe the Chinese investment will help turn all of this around until they find the money.  According to what’s in the news Taylor is being sued for 1.5 million.  In one instance the couple allegedly took over $1 million for themselves right out of the company to redecorate their Beverly Hills mansion and a few other items.  It appears now without the Hollywood connect that MMR might have a real stab at making the PHR company work.  They just recently signed up with Mediswipe for handling POS and transactions.  The PHR business has been slow to catch on and this company sounds like they have had more than their share of other issues by all means.  BD

Aug 21, 2011 (ACCESSWIRE via COMTEX) -- Given the untimely death of Russell Armstrong and the media blitz surrounding a situation that has made Taylor Armstrong one of the most recognizable names in the world, we have been trying to reach Bob Lorsch, CEO of MMRGlobal, Inc. MMRF 0.00% , for days. We finally spoke with him late last Friday to discuss the MyMedicalRecords.com ("MMR") lawsuit against Taylor Armstrong, Russell Armstrong and NuWay Digital Systems. Mr. Lorsch was hesitant to speak with us, especially given the fact that he has declined to comment on the situation to the national media even though MMR and their attorneys had been approached by many high-profile news organizations since Russell's suicide roughly a week ago.

Understandably, Lorsch was also hesitant about expressing any personal feelings towards the Armstrong's circumstances other than offering that his heart goes out to family. So while I had him in the phone, I quickly segued into a conversation about MMRGlobal, the publicly traded company he runs, its shareholders and the MyMedicalRecords.com lawsuit at hand.

When asked directly, Lorsch was clear that the lawsuit "is not going away." He stated, "I have an obligation to everyone who currently owns shares of the company with the trading symbol 'MMRF' on it." He continued, "This is not reality television. I cannot ignore Taylor and Russell's 2007 settlement agreement when representations in that agreement could represent millions of dollars to our shareholders. Every day I learn more about what the Armstrong's told investors about privately-held MyMedicalRecords.com and the consulting and fundraising services they provided to others. How many mailing lists did they exploit through Taylors special events invitation service to meet potential investors?

Where are the millions of dollars that flowed through their bank accounts and pockets? We have no reason to believe that Russell was broke or that Taylor is a victim of Russell without the ability to pay damages to MMR. Documents show Taylor's involvement in the handling of money paid to Russell for the benefit of MMR from investors. " Lorsch continued, "During Russell's bankruptcy it appears that Taylor was a frequent check signer and may have received money intended for MMR. That is why Taylor and Russell were both required to sign the MMR settlement agreement."

"During Russell's bankruptcy it appears that Taylor was a frequent check signer and may have received money intended for MMR. That is why Taylor and Russell were both required to sign the MMR settlement agreement." The press all over newspaper, web and television are painting the picture that Russell and Taylor Armstrong are without assets and completely broke. Commenting on the divorce that Russell and Taylor were currently in the midst of, Russell's lawyer, Ronald Richards, publicly stated that it was basically going to be a "no asset divorce" and told TMZ, "I feel bad because his credit cards weren't working ... He had tremendous financial problems."

Russell and Michael Nobel (of the Nobel Foundation, Nobel Peace Prize and some Armstrong-lead companies) had stayed and been entertained at Crosswhite's Park City, Utah house. He also informed us that he had introduced Russell to more than 25 companies seeking venture capitalist activities, for which Russell was paid healthy commissions on the fund raising. One of the companies, Genea Energy Partners, was tagged in September 2009 by Forbes Magazine as #13 on their list of "America's 20 Most Promising Young Companies." Crosswhite is very knowledgeable of the $10 million in capital that was raised for Genea as he was supposed to receive roughly $450,000 in commissions from Russell for making the introduction to Genea and getting him the business...money Armstrong never gave him.