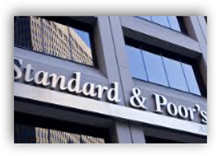 attention to this fact that math is all over the place, and our lawmaking methodologies need an update and soon.  The discussions and side shows along with all the drama just absolutely proved how far back in the 70s some folks are operating today in Congress and we all suffer due to this fact.  The White House did ask about the math and S and P admitted there were some errors, so again what’s not up with the Congress here?  I keep saying their digital illiteracy is going kill us and now we have all the blame shifting news coming out to add even more drama.  Back in 2009 when we had the Madoff scheme in the news, I asked about a Department of Algorithms or something along this line for financial formulas and maybe the time is getting closer.

I don’t care for credit agencies any more than anyone else does and basically it sounds like this was a warning to get things together.  They have a lot of data too and I don’t like some of what they are doing with it either, like using credit scores at FICO to mismatch and sell data that will predict whether or not patients will take their medicines but if nobody questions the “math” or algorithms, they get away with it.  Digital illiteracy allows them too and we all get fleeced.  Is anyone besides me on this little blog going to call them on mis matched data and marketing here?  I hope someone does. This goes to show how far the wrong math can be used and the power of persuasion with formulas.

So what’s this super committee without some real intelligence I ask?  Sadly its probably a bunch of the same old stuff and more chicken battles and drama queens and kings.

I have been watching the news and nobody else asked about the math so what does that tell you?  Duh?  Last week I wrote about the leader of the health insurance exchanges leaving and

about who wants that job as it’s all math and algorithms with the insurance companies so if one is not up to par on that then a bear of a job it will be.

So who’s going to do battle with S and P and their algorithms?  White House was up for it but nothing out of our digital illiterates on the Hill sadly as they don’t seem to get it and can’t even fathom using advanced technology like IBM Watson to help them query and do a better job.  The GAO and CBO are great resources too but they are auditing and accounting for most of what they do and to make laws today it’s time to use a little predictive modeling and not just everyone with a briefcase of their own numbers pleading a case, get everyone on the same page with the same numbers.

industry goes with math and algorithms as an FYI.  Bring the nerds…math…think the 2 go together yet?  You should.

Again the White House was on the money asking about the math which shows me they are ahead of Congress by miles as they get it.  Once more it’s a good time to pitch this book again if you have not read it yet, do it.

And where does the President hang out when he wants to learn about technology and look for tech related answers and suggestions?  Remember this dinner?  BD

WASHINGTON — The downgrade of the United States government’s credit rating by Standard & Poor’s is almost sure to increase pressure on a new Congressional “supercommittee” to mute ideological disagreements and recommend a package of deficit-reduction measures far exceeding its original goal of at least $1.5 trillion, lawmakers said Sunday.

The report certainly got the attention of Capitol Hill. “I think this is one of the most telling, important moments in our country’s history right now,” Senator John Kerry, Democrat of Massachusetts, said Sunday on the NBC program “Meet the Press.” He added: “This poses a set of choices not just about a recession. It’s about a financial crisis and the structure of our economy, which really has been misallocating capital.”

In the S.&P. report on Friday outlining the reasons for removing long-term Treasury debt from its list of nearly risk-free investments, the company cited doubts about the ability of the two political parties to bridge their gulf on fiscal policy.