Johnson and Johnson, Astra Zeneca and Other Pharma Companies Closing Down Facebook Sites–A Few Less Bricks in the “Wall”

The main reason of course here is for the chat and discussion from adverse affects from drugs, and the fact that as big as the companies are, who wants to pay someone to sit and monitor the discussions 24/7 as well.  That’s why I closed my site, it 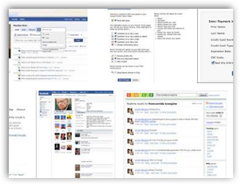 became a busy nightmare for me.  Many of the same companies have also closed down similar mobile apps as well.

All drug companies are not shutting down the sites and I think it all really depends on the drug being discussed too as Sanofi is keeping their diabetes site open and Amgen with their cancer site too.  This all occurred when Facebook announced the “open wall” policy and up until that time everyone was fine.  Some of the sites to be closed or that have already been closed has 40k likes on them so some of them had some pretty heavy traffic.  Facebook said they would allow some wall comments to be blocked on a few sites, but that apparently didn’t mean most of the companies I am guessing since some are leaving the pack.  BD

In a reversal by Facebook, most drug company pages will have to have open Walls starting Monday.

Companies are worried that open Walls mean risks, and many are reconsidering their engagement on Facebook. On Friday, AstraZeneca, which sells the antidepressant Seroquel, shut down a page devoted to depression. Johnson & Johnson said it will close four of its pages Monday. Other companies said they will monitor their pages more closely once the changes take effect.

Facebook will allow companies to continue to block Wall comments on specific prescription product pages, but those are a minority of pharmaceutical company pages. Most of the open pages would be focused on companies themselves or on disease or patient-specific communities, which then have ties to the companies’ prescription products.

AstraZeneca’s “Take on Depression” page, which closed Friday, had more than 1,100 “likes” — people following the page and its updates.