Anesthesiologist Charged With Sexually Assaulting 7 Women While Sedated in Oregon

The state board has suspended his license and he has admitted abuse with one patient.  This is scary for women to know that someone like this exists out there as when one is sedated, what control or ability do you have to fight back.  The man is married and has 2 children.  He has been charged with rape and felony sexual abuse.  BD

Court documents show that the anesthesiologist accused of the sexual 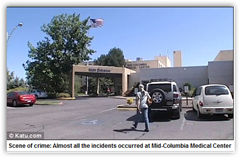 abuse and rape of seven women has admitted sexually touching at least one woman after he medically sedated her.

The admission came during a recorded conversation Doctor Frederick George Field had with one of his alleged victims, according to court documents.

Five more women, bringing the total to seven, have also come forward and accused Field, 45, of abusing them while they were incapacitated.

Field, of The Dalles, Oregon, was charged with rape and felony sexual abuse yesterday in an arraignment.

One of them says she was victimized in February, another in 2007. The five additional victims say they were abused from 2008 to as recently as last month.