his toe, so I said “Get on Skype put your toe up there”.  You can read more at the link below, but gee, why not?  Both the doctor and friend were happy with the suggestion and Skype is so widely known already too.  They had a great foot conference out of this:) 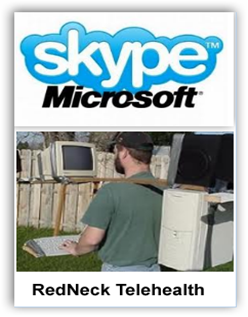 the meantime it’s Redneck healthcare, but it works!  Back when I wrote this a few months ago, Microsoft here in the US said they were also looking at incorporating Skype where they could but it may be a while before we hear anything but in the meantime, the NHS is hot after the trail of using Skype.  This is a big deal as you don’t have to sell the consumers and doctors on “value” either, it’s automatically recognized, unlike so much other software and programs that float around out there today too.  We are so over done with technologies that offer mobile apps that only do “one thing”, a huge glut and the stuff keeps coming.  I rant about it all the time and most of the developers that create consumer software don’t even think about using themselves to make matters worse.  We have ton of innovation in the US, but a big lack of collaboration.

I read today where some VCs left their start ups high and dry so maybe a bit more of that type of action and collaboration might start getting some real attention soon, I hope!   If the VCs just only started funding software that does more than “one thing” we would be miles ahead.  BD

Patients will be able to hold online consultations with doctors as part of plans to technologically revolutionize the NHS, according to its medical director.

Professor Sir Bruce Keogh said that IT will ''completely change the way we deliver medicine'' making access to GPs at any time a reality and giving patients the ability to talk to specialists anywhere in the country.

The health expert told The Times newspaper he was looking at using online services such as Skype to make the NHS more convenient for users.

''I am looking at how we can put levers into the system to encourage doctors to do online consultations,'' he said.

''Once you have online consultations, it breaks down geographical boundaries. It opens up the specter of 24/7 access.''