The replacement retinal cells are from embryonic stem cells and we all know what controversy that creates but good the trial has the go ahead to pursue and see if eye sight can be improved and slow down and halt the disease.

British surgeons are to take part in the first trial in patients of a human embryonic stem cell therapy to gain approval from regulators in Europe.

eyes of 12 patients with an incurable eye disease called Stargardt's macular dystrophy, one of the main causes of blindness in young people.

The clinical trial, designed to investigate the safety and tolerance of the groundbreaking therapy, is due to begin in December having received approval from the UK's Medicines and Healthcare products Regulatory Agency on Thursday. It is the first trial in people of a stem cell therapy to receive the go ahead from regulators in any European country. 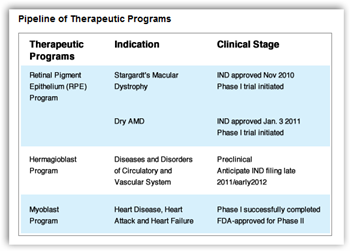 Medical teams hope to slow, halt or even reverse the effects of the disease by injecting healthy retinal cells into the eye. The trial is controversial because the replacement retinal cells – known as RPE, or retinal pigment epithelial cells – are derived from human embryonic stem cells.The Massachusetts-based company Advanced Cell Technology (ACT) announced the trial on Thursday. It will run alongside a similar study that began in July at the Jules Stein Eye Institute at the University of California, Los Angeles.