The doctors in Hawaii stated that that using maggots give the wound a jump start with healing.  Maggot debridement treatment is the actual name of the treatment.  The FDA approved the use of maggots a while back in 2004 for use with diabetics to help heal wounds.  These are maggots grown in a lab and not those found in the wild and they are encased in a something similar to a nylon so they stay put for a couple 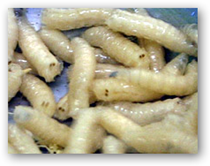 days.  There were even clinical trials in the UK at a children’s hospital that proved successful.

ZooBiotic now produces 600,000 maggots, and 1,500 dressings per month from its pharmaceutical production unit, supplying a client base of more than 4,000.

Is there a CPT Code for Maggots Yet?

In this report out of 37 all but 5 were helped and they even got rid of MRSA infections in 5 wounds that were resisting antibiotic treatment.  BD

(Reuters Health) - Researchers from Hawaii have a suggestion for how to jump-start the healing of difficult diabetic wounds: let maggots do the work.
To allow such wounds to heal, doctors remove infected or dead tissue with scalpels or enzymes, a process they call debridement.

But these tools often fail, said Dr. Lawrence Eron from Kaiser Hospital and the University of Hawaii in Honolulu.
"These problem patients with diabetes really need better treatments in order to salvage their limbs," he told Reuters Health.
"Maggot debridement treatment is overwhelmingly effective," he added. "After just one treatment these wounds start looking better."

Eron's team treated 37 diabetics with maggots. The patients all suffered from a type of artery disease that causes poor circulation in the limbs, and they all had stubborn wounds -- some up to five years old.

Maggots secrete substances into the wounds that liquefy dead tissue and then they ingest the material to further degrade it in their gut. The wounds are cleaned, and other substances contained in the maggot secretions allow the development of granulation tissue, a type of connective tissue that forms during wound healing.