Full information on the project is at the link at the bottom of the post.  This is an interesting relationship as Israel is known for their technology both in high tech and in life sciences.  When you think of that Intel processor in your computer, think Israel because that’s where a lot of the silicon technology for chips is developed, big R and D.

process for commercialization in global markets but also be beneficial to Massachusetts in terms of additional jobs and income.”

Israel is also going through some stressful times and some of it is kind of like what we have here with doctors and the shrinking middle class.  Officials as you can read below blame themselves for bringing in private insurance and didn’t realize years back what would happen and how it would evolve.

A few months ago I attended the Israel Convention here in Los Angeles and what a learning experience I had, it was all good and unlike any conference I had attended before.  What I found was really wild was that when I mentioned I used to write code the conversations immediately accelerated at least 10 levels, in other words let’s talk intelligent geek if you will.  I spent time talking with many companies and a doctor from Israel with her device she created for neck disorders. 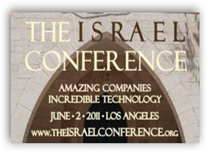 Physical Virtue Solution To Assess and Train Neck Disorders, Microsoft Kinect And More As Shown This Week at the Israel Conference

Israel already has a big Microsoft R and D presence there and has for years and that’s where Kinect came from and I chatted with Ilan Spillinger from Microsoft and was able to hear the whole story on how it all came about.  It was funny to hear many talk about their “tough” work ethics too and take a few shots at themselves, again in good humor.  Scott Eisenstein from PowerMat was also very interesting and you see their products now in Best Buy and they were in the news with a recent new partnership too of late with Duracell, so the partnering makes sense to bring jobs and better economic conditions to both countries with the MIP association.  You can read further as there are a few other organizations involved in the project to include MIT.

Today there are nearly 100 companies with Israeli founders or Israeli-licensed technologies in Massachusetts. Local firms exported over $180 million worth of goods to Israel in 2009 where 377 hospitals and 37,000 practicing physicians are located.

The partnership is a formal collaboration between Israel and the commonwealth to encourage and support innovation and entrepreneurship between Massachusetts and Israel’s life sciences, clean energy, and technology sectors. Massachusetts is the first U.S. state to establish such a program with the State of Israel.