It’s always interesting to see what’s happening occasionally in other countries with healthcare and in this case there have bee months of doctors striking for better working conditions who work at government hospitals.  In addition, most of them 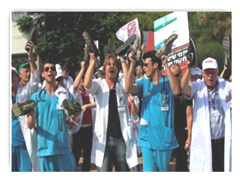 moonlight with private care to make ends meet.  It sounds like they have the same ailment that we have in the US with insurance to a degree.

As I understand from reading the content here, the private practice money made ended up shorting what would have normally flowed to the government facilities and thus a short fall there.  The country has 4 HMOs and all are required to join one of the four and there’s always the option to pay for private care.  Some of the same doctors working in the government facilities have referred patients to their private practice or those of other doctors.  The government pays $59% of the cost for the citizens, the lowest compensation percentage for a country with socialized medicine.  BD

JERUSALEM (JTA) -- Thousands of Israeli doctors spent the last four months engaged in a nationwide strike, using work stoppages, YouTube videos and a final hunger strike by disgruntled medical residents to protest their wages and working hours. Now that the doctors’ strike is over, Israelis are debating whether a raise in wages and shorter workdays can offset the deeper problems plaguing their country’s socialized health system.

“We have an excellent system with a lot of good manpower, but we’re losing ground in its funding and organization,” he said. “It’s a system afflicted with narrow interests that undermine the public nature of the system.”

Most doctors remained at the public hospitals and HMOs, but many began moonlighting, seeing patients privately and scheduling procedures outside the confines of the public health system. In 1995, a health care reform law allowed HMOs to begin creating optional supplementary medical insurance that Israelis could purchase and which allowed them greater access to affordable private care.

“Everyone’s running to private medicine, especially since the strike,” said Yisrael Barel, a regional manager for HMO Leumit in Netanya. “The senior doctors don’t like to operate in the public system and push customers to do it privately. I recently called a friend, a top surgeon, to ask him to take care of a patient, and he said, ‘You expect me to do private medicine in a public hospital?’ ”

Guverman blames the situation on the Health Ministry’s acceptance 16 years ago of the legal provision allowing the HMOs to sell supplementary health insurance.

The country’s shift toward private medical care is “our fault, and it’s something that we failed to reorganize,” he said. “It’s created a significant impairment of the health care system, and I don’t see any immediate solutions for that.”

For now, it's clear that the strike raised questions and doctors are still demanding answers. The Health Ministry blames much of the crisis on their own acquiescence to the supplementary health insurance, which led to the growth of private medical care.

For critics like Chernichovsky, it's a question of leadership, and the solution involves finding a way to change the policy debate and direction of the health care system.